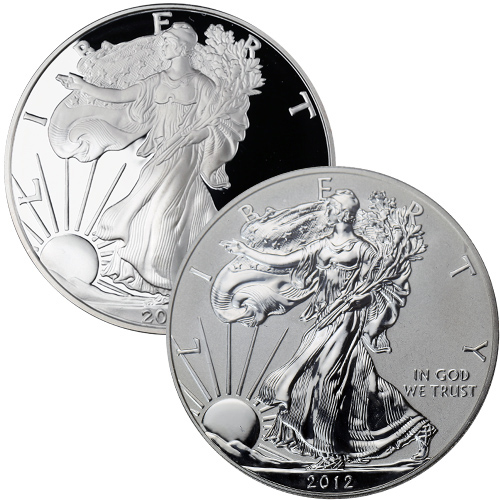 The 2012 issue year of the Silver American Eagle might have marked a rare lull in the otherwise immensely busy 2000s for the series, but that didn’t mean it was a year without luster and interest. The 2012-S Silver American Eagle San Francisco Mint 75th Anniversary Two-Coin Set is available to you now online at Silver.com.

The 2012-S Silver American Eagle Two-Coin set available here was released in honor of the 75th anniversary of the US Mint’s San Francisco Mint facility. The original home of the Silver American Eagle’s bullion and proof coin production, it had been out of the production queue for years after coining moved to the Philadelphia and West Point Mints in the 1990s and early 2000s.

Reverse proof silver coins swap the standard proof finishes. The background field is strong and frosted, while the raised design features of the coin have a deeply-mirrored, clear visual that creates immense contrast.

On the obverse side of all 2012-S Silver American Eagle Coins is the image of Adolph A. Weinman’s Walking Liberty. Representing the nation’s strides toward a brighter future, the image first appeared on the Walking Liberty Half Dollar from 1916 to 1947.

We encourage Silver.com customers to contact us at 888-989-7223 with any questions. You can also reach out to us online through our live chat and email. You can even visit our homepage to find the price of silver per ounce.