PLEASE NOTE – This coin may feature a trolley label or the brown label at our discretion. All labels will feature the San Fransisco (S) designation.

Silver American Eagle coins were introduced in 1986 following passage of the Liberty Coin Act in 1985. Struck only in a 1 oz weight by the United States Mint, the bullion version of the coin has a varied production history. The bullion coins were originally produced at the San Francisco Mint from 1986 to 1998, but production shifted to the Philadelphia Mint (1999 & 2000) and then the West Point Mint (2001 to present).

On the obverse side of all 2012 (S) 1 oz Silver American Eagle Coins is the image of Adolph A. Weinman’s Walking Liberty. Representing the nation’s strides toward a brighter future, the image first appeared on the Walking Liberty Half Dollar from 1916 to 1947.

Each of the coins in this product listing earned an MS69 grade from the NGC. Considered near-perfect coins, each has its full, original luster, but may have a maximum of two minor detracting flaws.

If you have questions for a Silver.com associate, don’t hesitate to reach out to us at 888-989-7223. We’re also available online through our live chat and email services. If you are interested in similar products, be sure to check out Silver.com’s full collection of American Silver Eagles. 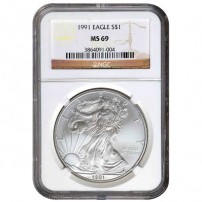