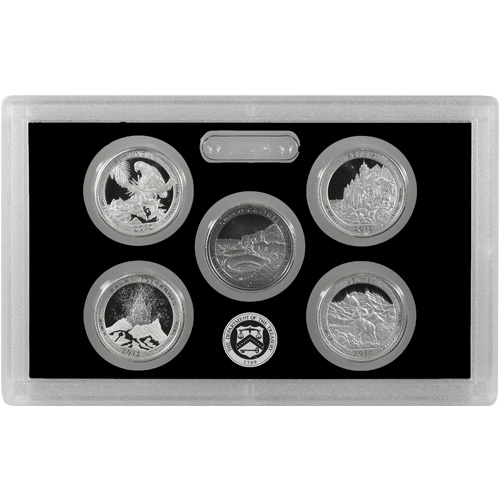 With each release in the America the Beautiful Series from the United States Mint, there were various versions of the coins available to investors and collectors. The primary focus of many silver buyers was on the 5 oz silver coins available in BU and Burnished versions. However, those who buy silver online could also find proof versions of the standard quarter with the ATB designs on the reverse. Now, 2012 Silver US Mint Proof America the Beautiful Quarter Sets are available to you for purchase online at Silver.com.

The 2012 ATB release featured coin designs celebrating some of the farthest reaches of the United States Mint. From the territory of Puerto Rico in the Caribbean Sea and the islands of Hawaii in the Pacific Ocean to the East Coast in Maine and the Final Frontier in Alaska. The 2012 design series crisscrossed the country like no other date mark in the collection.

Among the beautiful designs in the 2012 ATB release are images representing Denali, the highest peak in North America, and El Yunque National Forest, the only tropical rainforest in the territory of the United States. Also featured are the historic kivas of the ancient Chaco Culture in New Mexico, the historic lighthouses along Maine’s coast, and the active volcano at Kilauea, America’s most active volcano.

The obverse side of 2012 Silver US Mint Proof America the Beautiful Quarters in this set includes the depiction of President George Washington. The first President of the United States of America, Washington is shown here in a 1932 design from John Flanagan.

On the reverse of each coin in the 2012 Silver US Mint Proof ATB Quarter Set is a depiction of the aforementioned sites. This includes a parrot in El Yunque National Forest, the kivas of the Chaco Culture National Historical Park, Bass Harbor Head Lighthouse in Acadia National Park, Kilauea in Hawaii Volcanoes National Park, and a Dall sheep near Denali in Denali National Park and Preserve.

These 2012 Silver US Mint Proof America the Beautiful Quarter Sets come with all five designs from the 2012 ATB release. The coins are housed together in a US Mint holder with a commemorative shipper. Please keep in mind that these coins remain in original condition with the original packaging, though you may notice some wear and tear on the packaging. However, the packaging is still in good condition. These coins are standard-size US quarters issued with 90% silver content and 10% copper per coin.