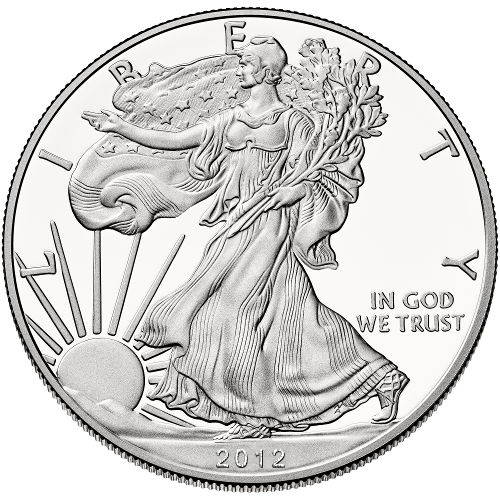 There was only one point in the history of the Silver American Eagle coin series that saw the United States Mint produced three different proof coins. As a celebration of the San Francisco Mint, an additional standard proof and rare reverse proof coin were struck in 2012 by the United States Mint. Silver.com has the 2012-W Proof Silver American Eagle coin available right now.

These two coins were sold only together in the San Francisco American Silver Eagle Two Coin Proof Set. Some of the additional San Francisco proofs were sold as part of the Making American History Coin and Currency set, which celebrated the US Mint’s 220th anniversary (founded 1792) and the 150th anniversary of the Bureau of Engraving and Printing.

On the obverse of each Silver American Eagle coin is the image of Walking Liberty from Adolph A. Weinman, created in 1916 and used on the Walking Liberty Half Dollar coin until 1947. The reverse features the heraldic eagle of the United States, refined and modernized for this coin series by then-Chief Engraver of the United States Mint John Mercanti.

If you have any questions, please don’t hesitate to ask a Silver.com associate. Our team members are available on the phone at 888-989-7223, online using our live web chat feature, and via our email address.