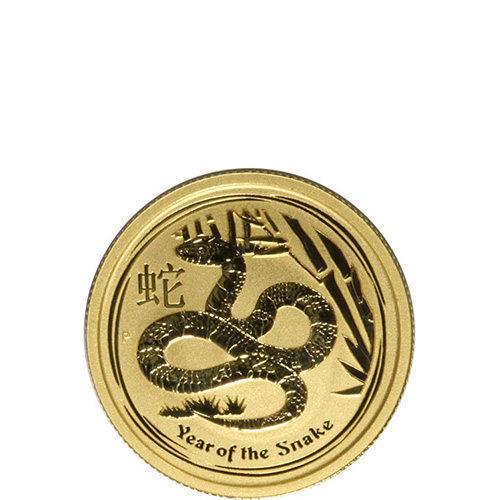 The Year of the Snake came and went in 2013 as the sixth year in the 12-year cycle of the Zodiac. The Chinese Lunar Calendar assigns an animal and its characteristics to every 12th year, with those born during those years believed to share the characteristics and traits of the representative animal. Today, 2013 1/4 oz Gold Australian Lunar Snakes are available to you online at Silver.com.

The Year of the Snake falls in the middle of the 12-year cycle of the Zodiac. The arrival of the Year of the Snake is associated with the Earthly Branch symbol. The Perth Mint issued unlimited mintages for seven of the nine weights in the 2013 Gold Australian Lunar Snake issue. The only coins with mintage caps were the 1 oz coin at 30,000 and the 10 Kilogram coin at 100. While the 1 oz coin sold out its allotment, the 10 Kilogram gold coin sold only 11 coins.

All 2013 1/4 oz Gold Australian Lunar Snakes in this product listing ship in an individual plastic capsule and come in Brilliant Uncirculated condition. The Perth Mint used an unlimited mintage for the 1/4 oz Gold Australian Lunar Snake, indicating that it would produce the coins through the end of 2013 and then stop production. As long as demand persisted, the coins were struck. In the end, 16,159 coins in the 1/4 oz Gold Lunar Snakes were produced. This was the third-highest behind the 30,000-coin sellout of 1 oz gold coins and the 23,700 1/10 oz gold coins sold.

Queen Elizabeth II is on the obverse of the 2013 1/4 oz Gold Australian Lunar Snakes. Her Majesty’s right-profile bust as featured here was created in 1998 by Ian Rank-Broadley for the Royal Mint of England. It was used on Australian denominations from 1999 to 2018.

A snake is shown slithering through the grass near stalks of bamboo on the reverse of 2013 1/4 oz Gold Australian Lunar Snakes. The stalks of bamboo creep in on the right of the design field as a small patch of grass is under the snake’s body in the lower left. Inscriptions include the Chinese symbol for a snake and the “P” mintmark of the Perth Mint.

Please feel free to reach out to Silver.com with your questions. Our team is available at 888-989-7223, online using our live chat, and via our email address.