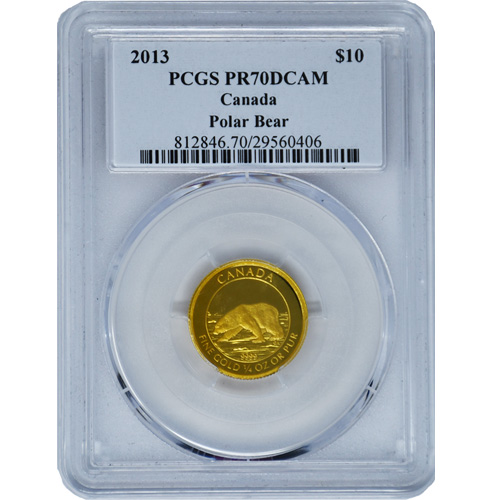 The largest bear species in the world today is the polar bear, a distinct species of bear that is specially adapted to life in the Arctic Circle. With massive paws, a large frame, and white fur, the polar bear is a capable hunter both on the polar ice shelves and beneath the frigid waves of the Arctic Ocean. Right now, 2013 1/4 oz Gold Canadian Polar Bears are available to purchase online from Silver.com in perfect condition.

Each 2013 1/4 oz Gold Canadian Polar Bear available here at Silver.com comes with a plastic slab and a perfect certification from the PCGS. PR70 coins exhibit full, original mint luster and present with no flaws of any kind on the design strikes or fields of the coin. The included DCAM designation is for deep-cameo proofs, an indication that the coins possess strong, frosted designs overlaying deeply-mirrored, clear fields.

Polar bears are the largest extant species of bear in the world today. The closest relative, and closest competitor by size, is the Kodiak brown bear. In fact, the two bear species are genetically linked, but have evolved over thousands of years to suit their specific habitats. As it relates to the polar bear, this species is found within the Arctic Circle on the ice shelves, seas, and inland waterways around the Arctic Ocean.

The obverse of the 2013 Gold Canadian Polar Bear Coin features a portrait of Queen Elizabeth II. Her Majesty is shown here in right-profile relief with no crown on her head, a first in a Canadian portrait during her reign. This effigy was created in 2003 by Susanna Blunt.

On the reverse side of 2013 1/4 oz Gold Polar Bears is an image of a polar bear as it strides along the polar landscape. The bear is captured in left-profile relief as it walks along the frozen landscape in search of its next meal. Polar bears have a larger frame than their closest cousins, but tend to have elongated, narrower heads compared to the broader skull of other bear species.

If you have any questions about gold coins for sale, please feel free to ask. Silver.com customer service is available online as well through our live chat and email address features.