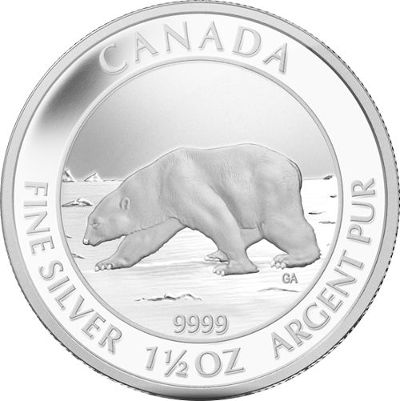 Canada is a land of many natural wonders and impressive wildlife. Among the more famous residents of the nation is the massive polar bear. The Royal Canadian Mint pays homage to the frozen tundra’s fiercest resident on the 2013 1 1/2 oz Silver $8 Canadian Polar Bear Proof Coins. The coin includes an image of the polar bear in its native environment, as well as the traditional imagery of Queen Elizabeth II on the opposite side.

The polar bear is viewed as a symbol of the power and vast landscape of Canada’s northern reaches. Iconic in Canada and around the globe as a resident of the North Pole, the polar bear embodies the spirit of many Canadians. The massive creature manages to survive, and even thrive, in the harsh climates of Canada’s frozen tundra. In Canada, the people see the polar bear as a reflection of their stalwart pragmatism and the spirit of adventure that has propelled the nation forward.

The Royal Canadian Mint struck a limited run of only 17,500 2013 1 1/2 oz Silver $8 Canadian Polar Bear coin. Canadian artist Germaine Arnaktauyok is responsible for the design of the image on the reverse side of the coin.

On the reverse side of the coin is Arnaktayok’s image of the polar bear. The animal can be seen walking across the frozen landscape of Canada with a few icecaps peaking above the horizon. Engravings on this side of the coin include the purity of the coin, the word “Canada,” and the phrase “Fine Silver 1 ½ oz Argent Pur.”

The obverse side of the coin includes Susanna Blunt’s right-profile image of Queen Elizabeth II. The monarch’s image is surrounded by engravings including “Elizabeth II,” as well as the face value and year of minting of the coin.

If you have any questions about the 2013 1.5 oz Silver $8 Canadian Polar Bear Proof Coins before placing your order, please call us at 1-888-989-7223. We can also be reached online through live chat and email for added convenience. You may also want to look over our full selection of Royal Canadian Mint Coins for more similar products.