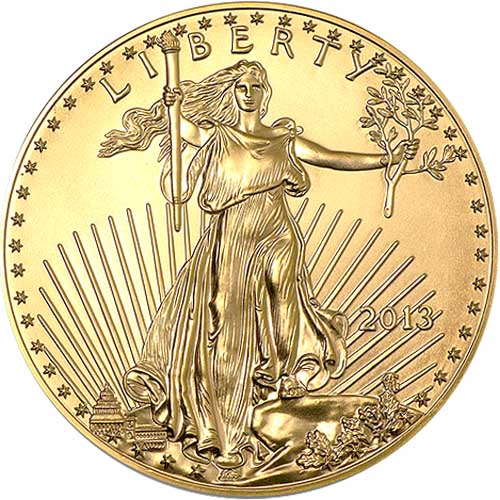 For the first time in 13 years, gold suffered a sizable decline in its value per ounce. The price of gold opened in 2013 at $1,700 per ounce, but two steep drops in market values brought the price of gold per ounce to a close of $1,204.50 to end the string of annual jumps in value that had been sustained for over a decade.

On the obverse of the Gold American Eagle, the classic image of Liberty created in 1907 by Augustus Saint-Gaudens appears. President Theodore Roosevelt approached Saint-Gaudens in 1905 to lead an effort at modernizing American coinage with distinctly American designs, and this Liberty image has persevered over more than a century as the nation’s most iconic design.

The reverse of all 2013 1 oz Gold American Eagle coins features a family of nesting bald eagles. Created by Miley Busiek in 1986 exclusively for these coins, it includes a male flying over the nest which is guarded by a female and contains a group of hatchlings.

All Gold Eagles listed here are in BU condition. Coins in this condition have no wear and tear. With that said, minor flaws are possible in BU coins and range from breaks in the luster and spotted surfaces, to contact marks from striking the blanks during production.

We encourage Silver.com customers to ask questions when necessary. We’re available to help at 888-989-7223, online via our live chat, and through our email address.