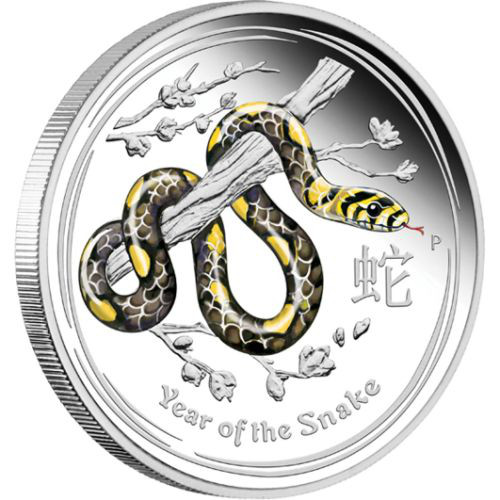 Proof coins are already coveted for their beautiful finish, low mintage figures, and in the case of the Lunar Series II coins, low mintage figures. Add colorization to the designs, and you have a one-of-a-kind product that any numismatist would covet as part of a personal collection. Today, the 2013 1 oz Proof Colorized Silver Australian Snake Coin is available on Silver.com in original box.

Lunar Series II coin releases from the Perth Mint follow the 12-year cycle of the Chinese Lunar Calendar. Each year a new animal design is released to coincide with the creature depicted on the Zodiac for that particular year.

On the reverse of each 2013 1 oz Proof Colorized Silver Australian Snake Coin you’ll find the colorized image of the Year of the Snake design. The body of the snake is the only thing colorized in this design, with a mostly black body and a few patches of yellow scales. Engravings include “Year of the Snake,” “P” for the Perth Mint, and the Chinese symbol for snake.

The obverse includes the right-profile portrait of Queen Elizabeth II. Created in 1998 by Ian Rank-Broadley, it represents the fourth-generation image of Her Majesty to appear on British or commonwealth coinage during her reign as Queen of England.

Each of the 2013 1 oz Proof Colorized Silver Australian Snake Coins in this listing arrives in a Perth Mint black and red display box. It not only keeps your coin safe, but makes an excellent display piece for your purchase.

Perth Mint was founded in 1899 as the third Royal Mint facility in Australia under British control. Following the closure of the Sydney Mint and Melbourne Mint, it was left as the nation’s oldest operating facility. Today it is owned by the state government of Western Australia.

Please direct your questions to a Silver.com associate. You can reach our customer service team at 888-989-7223, connect with us online through our live chat, or email us directly.