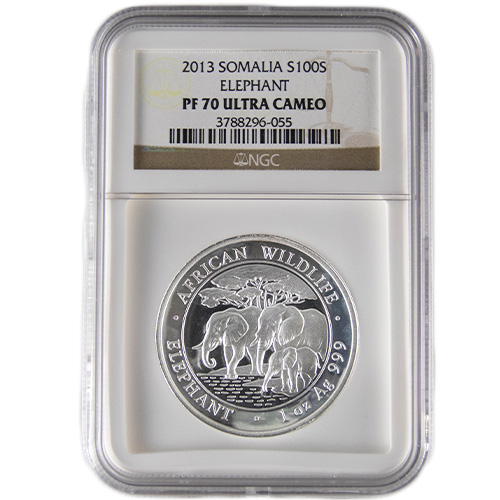 The African Wildlife Coin series released from the Bavarian Mint first began in 1999. Each product in this bullion collection features wonderful designs made with high quality, with this 2013 release being no exception. Coin collectors everywhere will want to add this exclusive proof release to their collections. Today, the 2013 1 oz Proof Silver Somalia Elephant Coin NGC PF70 can be purchased online from Silver.com.

The 2013 1 oz Proof Silver Somalia Elephant Coin has been struck in 99.9% fine silver and is considered a legal tender of the Somali Republic. The coin has received a grading of PF70 from the NGC, meaning It shows no flaws and is considered a perfect specimen. It also retains its full, original mint luster. The coin’s proof quality means that the design elements are frosted while the coin’s background is mirrored.

This special African Wildlife Coin collection is an exclusive release from the Bavarian Mint. The Bavarian mint is located in Munich, Germany, and has issued these coins on behalf of Somalia since 2004, having previously issued them from 1999 to 2003 for Zambia.

On the reverse of the 2013 1 oz Proof Silver Somalia Elephant Coin is a family of elephants, shown with their young baby. The elephants are shown walking through their wildlife home with long, textured trunks. The coin’s artistry features very detailed imagery with the viewer able to see the roughness and texture of the elephants’ skin. The terrain shown in the background of Africa is also designed with great detail. The obverse also shows its weight and purity, as well as two inscriptions: “AFRICAN WILDLIFE” and “ELEPHANT”.

The obverse of the 2013 1 oz Proof Silver Somalia Elephant Coin shows the coat of arms of Somalia. The design on this side of the coin is featured to represent the pride and heritage of the Somali people. The coat of arms has a shield emblem held by two leopards with a single star shown on the shield that mirrors the flag of Somalia. Below the leopards are two Spears and palm leaves that are intertwined with a ribbon. The release year and value of the coin are shown on its reverse, as well as the inscription, “SOMALI REPUBLIC”.

Our team at Silver.com is here to answer any questions about these 1 oz silver coins. Contact us today at 888-989-7223, or use our online live chat or email features.