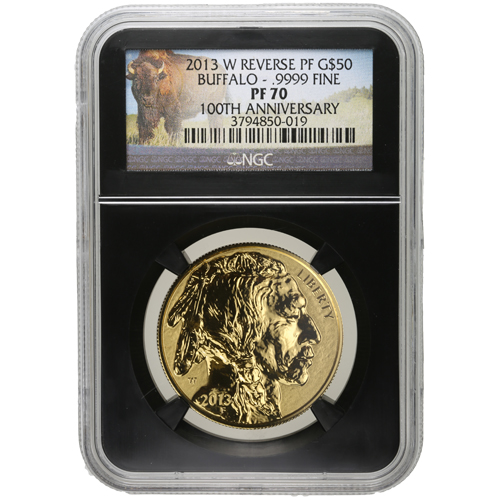 The Gold American Buffalo is the purest gold coin offered from the United States Mint, and a history making series because it was the first-ever 24-karat gold coin from the mint. For more than a century, American gold coinage was pegged to .900 content, and it took 159 years to break through to .9999 purity. The 2013-W 1 oz Reverse Proof Gold American Buffalo Coin is a unique release in the series and available to you online for purchase today at Silver.com.

For 2013, the United States Mint released a limited number of Gold American Buffalo 1 oz gold coins in a reverse proof finish. The concept was pursued to celebrate the 100th anniversary of James Earle Fraser’s Buffalo Nickel design being released for circulation. The original Buffalo Nickel debuted in 1913 and was in circulation through 1938.

Buffalo Nickel coins depicted images familiar to Fraser as a native of the Upper Midwest and the Plains. His family was from Minnesota and he spent extensive time in the Dakotas with his father, leading to his creation of a uniquely American coin bearing images of a Native American and an American bison.

On the obverse of the Gold American Buffalo coin is Fraser’s depiction of a Native American tribal leader. His creation represents not one individual, but instead was formed by artistically combining the facial features of three different tribal leaders in early 20th century America.

The reverse of the 2013-W 1 oz Reverse Proof Gold American Buffalo Coin includes the image of Black Diamond. This American bison was a resident of the Central Park Zoo and was used as inspiration for Fraser’s Buffalo Nickel reverse design field.

All 2013 Gold American Buffalo Coins in this listing are considered perfect proof specimens by the NGC. Coins with a PF70 grade display full, original mint luster and no detracting flaws. As reverse proof specimens, these coins have deeply-mirrored, clear devices and a background field that is strong and frosted.

Please feel free to reach out to Silver.com with your questions. You can connect with us on the phone at 888-989-7223, on the web using our live chat, and via our email address.