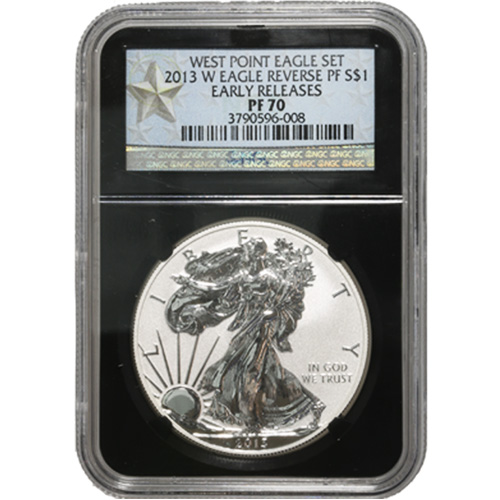 To mark the 75th anniversary of the founding of the West Point Mint as a depository facility for the US Mint, the Silver American Eagles were issued in 2013 with a special two-coin set. This set featured two unique versions of the Silver Eagle: a reverse proof and an enhanced uncirculated coin. Now, 2013 1 oz Reverse Proof Silver American Eagles are available to you for purchase online at Silver.com in perfect condition.

The building that now serves as the West Point Mint in the United States Mint system was built in 1937 near West Point’s US Military Academy. The West Point Facility was originally a production and depository facility not officially listed as a branch mint facility. In 1988, the United States Mint elevated the status of the bullion depository at West Point to that of branch min. The same year saw the building listed on the National Register of Historic Places.

To honor the very special 75th anniversary of the West Point Mint’s construction, the US Mint issued an additional two-coin set of 2013 Silver American Eagles. The coins in the set included an enhanced uncirculated version of the Silver Eagle and a reverse proof version with mirrored elements and frosted fields.

Walking Liberty is found on the obverse of the 2013 1 oz Reverse Proof Silver American Eagle. This design depicts Liberty in left-profile relief walking toward the sun on the horizon with her hand outstretched toward the light of a new day as her other hand carries branches of oak and laurel.

The heraldic eagle of the United States, the national emblem of the federal government, features on the reverse side of 2013 Reverse Proof Silver American Eagles. This version of the design was modernized in 1986 by John Mercanti.

These 2013 1 oz Reverse Proof Silver American Eagles are in perfect condition. Coins in PR70 or PF70 condition showcase full, original mint luster and have no detracting flaws. You should note it is possible for varied additional labels, such as UCAM or DCAM, to feature with these coins. This is not guaranteed however, neither is the specific grading house that issued the perfect grade.