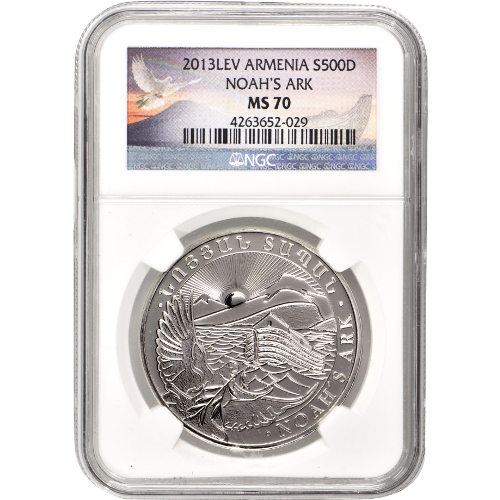 The biblical tale of Noah’s Ark is one that all Christians know by heart. In that tale, Noah is commanded by God to construct an ark to save two of every animal species on Earth, plus his family, from a cleansing flood. Noah’s Ark came to rest atop Mount Ararat, which was historically located in the nation of Armenia. Today, the 2013 1 oz Silver Armenian Noah’s Ark Coins is available from Silver.com.

Armenia was the first nation in the world to adopt Christianity as an official state religion, a decision that was made over a millennium ago. If that connection to the Christian faith wasn’t deep enough, Noah’s Ark literally came to a rest within the ancient borders of this Eastern European nation.

On the reverse side of each of these coins is the image of Noah’s Ark as it floats atop the flood waters. A lone dove soars into the foreground bearing an olive branch, signifying the flood is coming to an end. In the background, the sun peeks over the top of Mount Ararat.

The obverse side of each coin features the coat of arms for the Republic of Armenia. The coin’s weight, metal content, purity, and face value are all included on this side. Engravings on both sides of the Armenian Noah’s Ark are featured in English and Armenian.

All of the coins available in this product listing are in perfect condition according to the NGC. Coins with and MS70 grade have their full, original luster, and no blemishes, contact marks, detracting flaws, or hairlines.

We encourage all Silver.com customers to direct their questions to a team member at 888-989-7223. We’re also available through our live web chat feature and email. If you are looking for similar items, be sure to check out our full selection of Armernian Silver Noah’s Ark Coins.