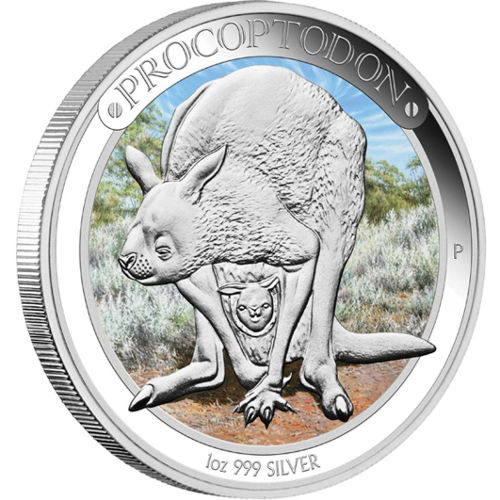 Australia’s diverse ecosystem is known as the home of some of the world’s most unique, and in some cases fearful, animals. Among the modern creatures that capture the awe of the world are kangaroos, koala bears, and the massive crocodiles that prowl the waters around the continent. The 2013 1 oz Silver Australian Procoptodon Proof coin pays homage to one of the continent’s extinct creatures, and was the first in a series of coins honoring the lost creatures of Australia.

As the first coin in the series honoring extinct creatures from the continent, the 2013 1 oz Silver Australian Procoptodon Proof coin brings Australia’s exciting past to life with vivid designs and bright color. The primary image on the coin is that of a procoptodon, a predecessor to the modern kangaroo that roamed the continent of Australia during the Pleistocene Era.

The procoptodon was a massive creature, standing at an average height of 6 1/2 ft. tall and weighing up to 500 lbs. These creatures had a flatter face than the modern kangaroo and one large toe on each foot that was similar to a horse’s hoof. This procoptodon proof is the first in a series that also includes coins commemorating the diprotodon, genyornis, thylacoleo, and megalania.

On the reverse of the 2013 1 oz Silver Australian Procoptodon Proof is the image of a mother procoptodon carrying a young baby in its pouch. The colorized background on the proof coin features the natural hues of Australia’s Outback. Engravings on this side include the word “Procoptodon,” along with the weight, purity, and metal content.

The reverse side features Ian Rank-Broadley’s right-profile portrait of Queen Elizabeth II. Her Majesty’s image is surrounded by engravings of “Elizabeth II,” “Australia 2013,” and the legal tender value of the proof coin.

If you are looking for more information on our 2014 1 oz Silver Australian Procoptodon Proof Coins or have any questions, you can contact Silver.com  at 888-989-7223. We can also be reached through our website by using the live chat feature or by simply sending us an email.