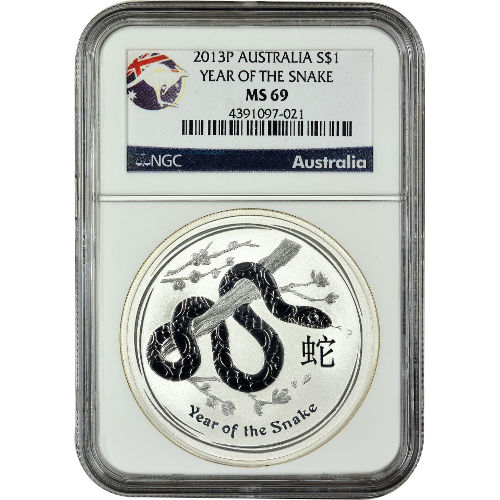 The Lunar Series II coin program from the Perth Mint debuted in 2008 and built upon the success of the previous Lunar Series coins from the mint. The original Lunar Series from Perth was the first of its kind in the world, and sparked not only the Australian mint’s second series, but countless others around the world. Right now, the 2013 1 oz Silver Australian Snake Coin is available in near-perfect condition on Silver.com.

Each 2013 1 oz Silver Australian Snake Coin in this Silver.com listing earned an MS69 grade from the NGC. Coins in this condition exhibit full, original mint luster, but also bear a maximum of two minor detracting flaws. These flaws are limited in scope to miniscule contact marks or hairlines, none of which are found within the primary focal areas.

The coins in the Lunar Series II program from the Perth Mint are released in accordance with the Chinese Lunar calendar, and the order of the animal’s appearance in the Zodiac. The snake is the sixth animal in the Zodiac, and its most recent appearance on the lunar calendar covered February 2013 to January 2014.

On the reverse face of the 2013 1 oz Silver Australian Snake Coin you’ll find the image of a snake coiled around the branch of a tree. Engravings on this face include “Year of the Snake,” the Chinese symbol for snake, and the “P” mint mark of the Perth Mint.

Flip the coin over and you’ll find Queen Elizabeth II’s right-profile portrait from Ian Rank-Broadley. This image has graced Australian coinage since 1998, and includes engravings of “Elizabeth II,” “Australia,” “1 Dollar,” “2013,” and “1 oz 999 Silver.”

Perth Mint is located in Perth, Western Australia and was originally opened in 1899 as the third and final facility in the Royal Mint system. Following Australian federation, the Perth Mint remained in British control and struck Australian currency until the establishment of the Royal Australian Mint in 1965.

If you have any questions, please contact Silver.com at 888-989-7223, connect with us online using our live chat, or simply email us. To see similar products, check out our full selection of Certified Silver Coins.