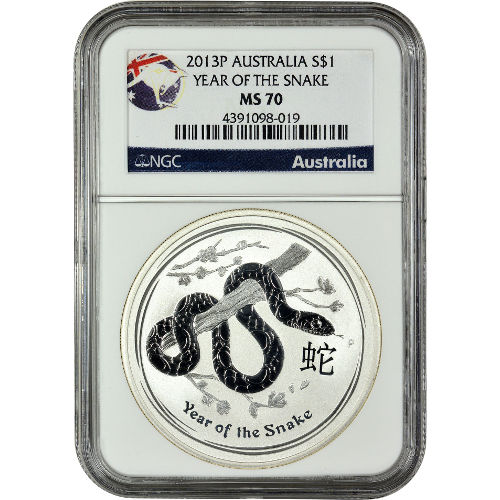 There are few coin series that attract more attention on an annual basis than the Perth Mint’s Lunar Series II. The second series from the Perth Mint to feature lunar-themed designs, these coins have a heritage that stems from Perth’s original Lunar Series, the first in the world to celebrate the creatures of the Chinese Zodiac. Today, Silver.com offers the 2013 1 oz Silver Australian Snake Coin for purchase in perfect condition.

Lunar Series II coins debuted in 2008 and are scheduled to run for 12 years, with one coin representing each of the 12 animals in the Zodiac. This is the second series from the Perth Mint of this type, with the original Lunar Series also featuring 12 designs and running from 1996 to 2007.

The Year of the Snake represents the sixth animal in the cycle. Those born under the sign of the snake are said to be intelligent, independent, and analytical, yet charming and graceful. Like other signs in the Zodiac, the Year of the Snake occurs every 12 years.

Each 2013 1 oz Silver Australian Snake Coin in this listing has a perfect Mint State 70 grade from the NGC. Coins in this condition still feature full, original mint luster and bear no detracting flaws of any kind.

The obverse face of the coin bears the right-profile portrait of Queen Elizabeth II. Created in 1998, this design from Ian Rank-Broadley represents the fourth-generation portrait of Her Majesty on British and commonwealth coins.

On the reverse of the 2013 1 oz Silver Australian Snake Coin you’ll find the unique Year of the Snake design. It focuses on a snake clinging to the branch of a tree, and bears engravings of “Year of the Snake” and the mint mark of the Perth Mint.

Please feel free to contact Silver.com with any questions you might have by calling us at 888-989-7223, chatting with us live online, or sending us an email with your inquiries. Silver.com also carries a number of other Certified Silver Coins that you may be interested in.