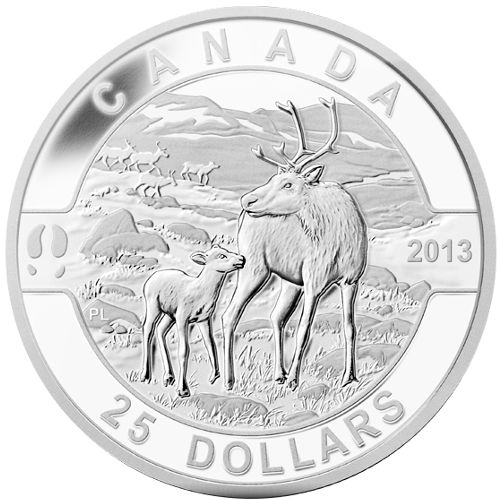 This 2013 Canadian Silver Caribou Coin was released by the Royal Canadian Mint as a part of its exclusive “O Canada” coin series. It is the fourth coin to be released in the series and it holds the distinction of being one of only 8,500 caribou coins to ever be minted. Each caribou coin was made from one troy ounce of the silver which is 99.99% pure, giving it a higher purity level than many other coins. The Caribou coins are guaranteed to arrive in brilliant uncirculated condition along with a protective keepsake box.

The “O Canada” coin series takes its viewers on a journey through Canada’s most scenic locations. This particular coin brings us to the grassy hills of Northern Canada to observe a herd of caribou in their natural habitat. The foreground depicts a tender moment between a mother caribou and her young calf, who is affectionately nuzzling against her hind leg. In the distance stands the rest of the herd on the rugged terrain. From the short tufts of grass that peek through the rocky ground to the angular pattern of the caribou’s antlers, no detail has been omitted in depicting this statuesque creature or its native home. Also inscribed unto this coin is the name “Canada,” the coin’s denomination and the year, “2013.” Opposite the mintage date sits a symbol that wildlife enthusiasts will recognize as a caribou hoofprint.

As with other pieces of Canadian currency, this reverse side depicts the likeness of Queen Elizabeth II. Her noble profile serves as a reminder of Canada’s heritage and former British Rule. Encircling this effigy is her name and the phrase “D.G. Regina,” which is Latin for “queen by the grace of God.”

With its breathtaking artistry and its exceptional craftsmanship, this 2013 Caribou Coin is certain to become popular among coin collectors and animal lovers. To protect your purchase, insurance coverage is included with each shipment. Orders with a value of $1,000 or more require a signature before delivery for further security. You can reach our professional service staff at 888-989-7223 to place an order or ask any questions. We can also be reached by live chat or through email as well.