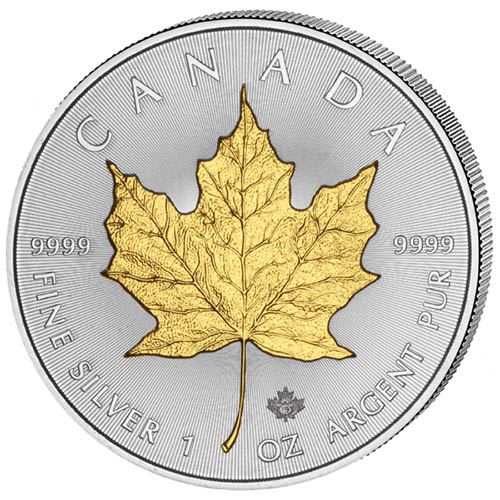 Each 2013 1 oz Silver Canadian Maple Leaf Coin in this product listing is available to you in Brilliant Uncirculated condition. These coins are housed inside of protective capsules and were originally produced as standard bullion coins by the Royal Canadian Mint. The coins were later gilded with the 24-karat gold layer after production by a third-party authorized dealer.

Gilded silver coins have a thin layer of 24-karat gold applied to specific design elements. In the case of Silver Canadian Maple Leaf coins, that gilded layer is limited to one design feature on the reverse face of the coins. The layer of gold is not enough to change the inherent metallic value of the coins, but it does add collectible attraction.

The Royal Canadian Mint was founded in 1908 as the sovereign mint of the nation. It originally consisted only of the Ottawa Mint and now includes the Winnipeg Mint to support circulation currency production in the country.

If you have any questions, please don’t hesitate to reach out to Silver.com. You can call us at 888-989-7223, chat with us live online, or email us directly.