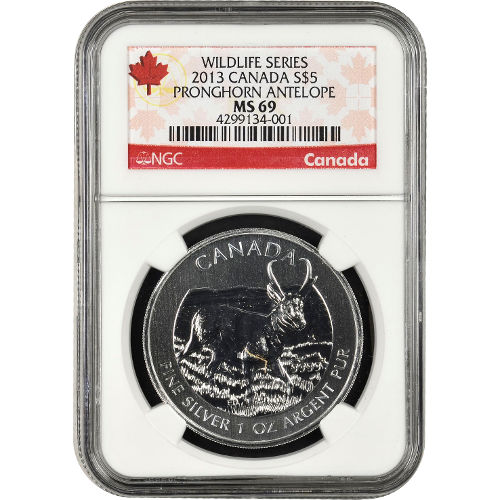 Few coin programs from the Royal Canadian Mint have enjoyed the success and demand of the Canadian Wildlife Series. Struck from 2011 to 2013, these silver bullion coins were prized by investors for their .9999 fineness and coveted by collectors for their limited mintage, as well as changing design themes. The 2013 1 oz Silver Canadian Pronghorn Antelope Coin is now available on Silver.com in near-perfect condition.

All 2013 1 oz Silver Canadian Pronghorn Antelope coins in this Silver.com are considered near-perfect specimens by the NGC. Coins with an MS69 grade have their full, original mint luster, but may also feature as many as two minor detracting flaws.

The Silver Canadian Wildlife Series of coins originated in 2011 with the timber wolf and grizzly bear designs. The program continued with the cougar and moose in 2012, and concluded in 2013 with this 1 oz Silver Canadian Pronghorn Antelope coin and the wood bison design. Royal Canadian Mint Assistant Engraver William Woodruff created the four designs used in 2011 and 2012.

On the reverse side of the coin is the first design in the series from Canadian artist Emily Damstra. Her image features a pronghorn antelope, the Western Hemisphere’s fastest land mammal, grazing on the open plains.

The obverse features Susanna Blunt’s 2003 depiction of Queen Elizabeth II in right-profile relief. Her Majesty’s effigy graces the obverse of all Canadian coinage, and she is now well known as the longest serving monarch in British history.

If you have questions, please contact Silver.com. Our associates are available at 888-989-7223, online using our live chat, and via email.