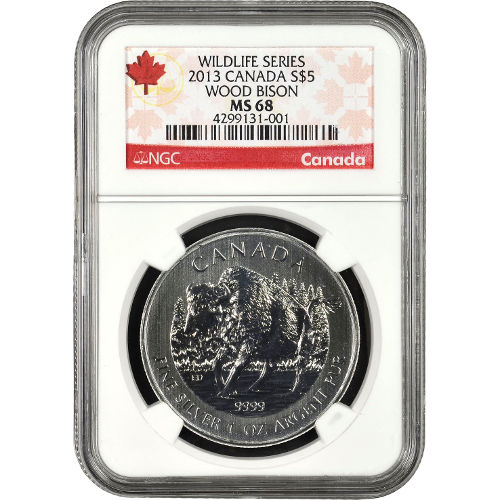 The Royal Canadian Mint’s Canadian Wildlife Series was a six-coin series that featured unique creatures from the Canadian wilderness. Included in the series were the timberwolf (2011), grizzly bear (2011), cougar (2012), moose (2012), and pronghorn antelope (2013). RCM Assistant Engraver William Woodruff designed the 2011 and 2012 coins, while Emily Damstra designed the 2013 coins.

All 2013 1 oz Silver Canadian Wood Bison Coins available to you today through Silver.com are in Mint State 68 condition from the NGC. Coins of this condition have an attractive strike and their full, original mint luster. However, you may notice three to four minor contact marks on the surface, though all are located outside the primary visual regions of the coin.

On the reverse is Damstra’s wood bison design. Damstra is a famed Canadian artist, and she has contributed to numerous Royal Canadian Mint coin series since participating in the Canadian Wildlife Series.

The obverse features the 2003 depiction of England’s Queen Elizabeth II. The longest reigning monarch in British history is captured in right-profile relief by Canadian artist Susanna Blunt, and featured along with engravings of her name, the year of issue, and the face value of the coin.

The Royal Canadian Mint opened its doors for the first time in 1908 following the discovery of precious metals in the Yukon Territories in the late 19th century. Today, it is among the most respected facilities in the world.

We invite Silver.com customers to contact us with questions. Feel free to call us at 888-989-7223, chat with us live online, or email us. 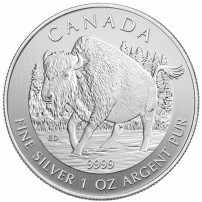