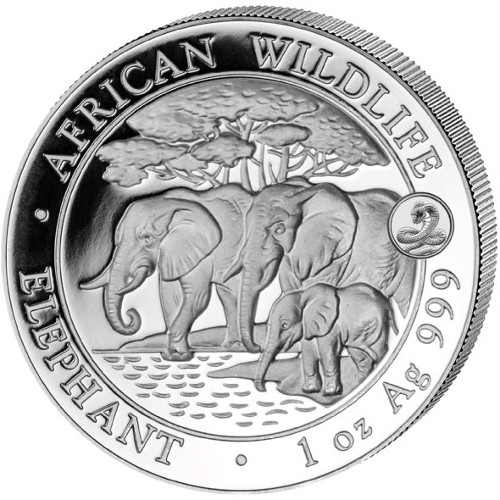 Silver Somalian Elephants actually debuted in 1999 as Zambian Elephant coins, which had the nation of issue rights from 1999 to 2003. The coins were shifted to Somalia starting in 2004, but throughout the history of the African Elephant release there’s been a new design on the obverse face.

These 2013 1 oz Silver Somalian Elephant Snake Privy Coins feature the 2013 exclusive African elephant design, and feature a nod to the Year of the Snake on the Chinese Lunar Calendar. The privy mark features a cobra snake in a small circle on the right-hand side of the design field.

On the obverse of these coins you’ll find the African Elephant design for 2013, which features three elephants from a herd drinking water along the shores of a body of water. There are two adult elephants and one young calf in the design, with the cobra snake privy on the right-hand side.

The reverse of all 2013 1 oz Silver Somalian Elephant Snake Privy Coins includes the coat of arms for Somalia. This design includes a heraldic shield with the single star of Somalia featured on it, with a leopard on either side of the shield to hold it up. Engravings include “Somali Republic,” “2013” split on either side of the design field, and the face value of the coin as “100 Shillings.”

Each 2013 1 oz Silver Somalian Elephant Snake Privy Coin in this listing is in BU condition. Coins in this condition show no signs of wear and tear, however you may notice minor flaws ranging from breaks in the luster and spotted surfaces to contact marks from the coining process.

We encourage Silver.com shoppers to reach out to us with any questions. You can reach our customer service team in many ways. We’re available on the phone at 888-989-7223, online through our live web chat feature, or via our email address.