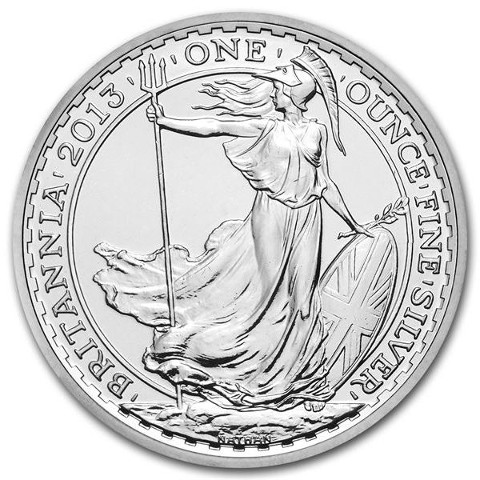 The Britannia is the official silver bullion coin of the United Kingdom. Britannia coins have been struck in one denomination or another for centuries, though the current incarnation of the coin dates back just two decades. Today, you can purchase a special 2013 1 oz Snake Privy Silver British Britannia from Silver.com in brilliant uncirculated condition.

Britannia has a history that dates back almost two-thousand years. The first appearance of the term was noted in Latin and was used to identify the island of Britain during the Roman Empire’s conquest of the region. Britannia came to be known as a Roman Goddess responsible for guarding the United Kingdom, and was often featured wearing a helmet while yielding a trident and shield.

Today, Britannia is viewed as a symbol of Britain’s power and the unity of the United Kingdom. This 2013 1 oz Silver British Britannia is unique in that it carries the symbol of a snake in honor of the reptile’s appearance on the Chinese lunar calendar that year. The snake privy mark is featured in intervals along the milled edge of the coin, marking the first time such a design element was used by the Royal Mint.

On the reverse side of the 2013 1 oz Silver Britannia is the image of Britannia herself, as envisioned by designer Philip Nathan. His depiction displays Britannia with a trident in her right hand, Corinthian helmet on her head, and a shield in her left hand. Noticeable on the face of the shield is the Union Jack, Britain’s flag. The obverse bears Ian Rank-Broadley’s right-profile portrait of Queen Elizabeth II.

The Royal Mint is one of the oldest facilities in the world. It was originally founded as the London Mint over 1,100 years ago in 886. Over the course of 1100 years it has served as the facility responsible for striking coins for British sovereigns and the democratic government of the United Kingdom.

If you have any questions about the 2013 1 oz.Silver Britannia with the Snake Privy mark, we welcome your inquiries. Silver.com associates are available on the phone at 888-989-7223 or online using our live chat and email services.