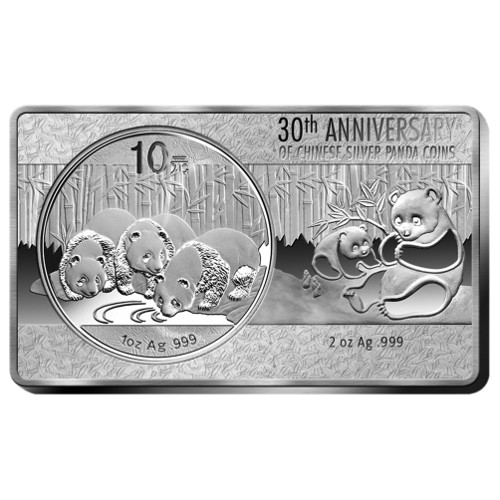 The Silver Chinese Panda is one of the most popular bullion products in the world today. Introduced in 1983, the coin originally featured only a proof version. After a brief hiatus, the coins were made available in both proof and bullion versions. By 2003, the Chinese Mint celebrated the 30th anniversary of the coin. Today, a 2013 3 oz 30th Anniversary Silver Chinese Panda Bar is available on Silver.com.

These coins were minted from 1983 to 1985 in proof only. Silver Chinese Panda coins were not struck in 1986, returned in 1987 in bullion and proof, and since 1988 the 1 oz. version has been struck on an annual basis. A new panda design has featured on the obverse every year, with the exception of 2001 and 2002 when the same design was used.

For the 30th anniversay of the coin in 2013, the Chinese Mint produced a coin-bar combo that featured the 2013 Silver Chinese Panda coin in a 1 oz. variety, and a new design for the bar that was used exclusively on its obverse. The two designs blended together seamlessly in a horizontal bar design.

These 2013 3 oz 30th Anniversary Silver Chinese Panda Bars were struck by the Chinese Mint. The Chinese Mint does not place mint marks on any of its products, making it difficult to determine the origin of Panda coins and bars.

Please direct any questions you have about these bars to the associates at Silver.com. Our team members are available on the phone at 888-989-7223, connect with us online using our live web chat, and email address.