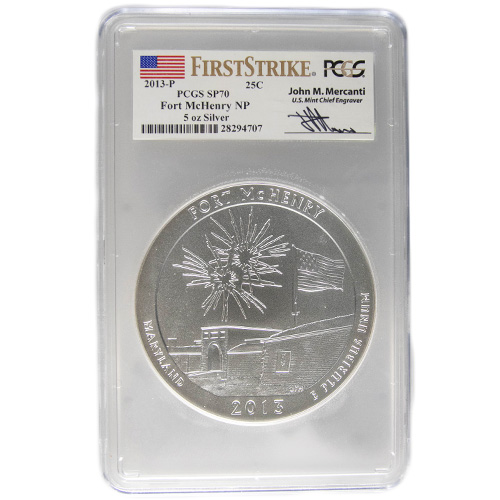 The America the Beautiful Series was issued by the United States Mint from 2010 to 2021. This 56-coin series was one of the most ambitious and beautiful coin collections the US Mint has ever issued. The designs in this series celebrated the natural wonders and historic monuments that make the United States of America what it is. Today, 2013 5 oz Silver ATB Fort McHenry Coins are available to you online at Silver.com in perfect condition.

Each date mark in the Silver ATB Series comes with five fresh designs. The goal of the program was to explore the natural beauty, historic places, and vital moments in American history that shaped the nation over the course of its more than two-century history. All 50 states were represented with a distinct design in the series, as well as the nation’s five overseas territories and the District of Columbia.

All of these 2013 5 oz Silver ATB Fort McHenry Coins come to you in plastic slabs with a perfect certification from the PCGS. Coins in SP70 condition have full, original mint luster and present with no detractions of any kind.

On the obverse side of 2013 Silver ATB Fort McHenry Coins is a depiction of President George Washington. The man who led the colonies through the Revolutionary War against the United Kingdom and later served two terms as the 1st President of the United States is shown here in left-profile relief with markings denoting the nation of issue and face value of the coins.

The reverse field of the 2013 Silver 5 oz Fort McHenry Coin comes with a depiction of the famous fortification at Baltimore Harbor. As the Royal Navy hoped to knock out a strategic American fort and move inland at the heart of the nation, brave American troops stationed in the fort withstood a bombardment from the Royal Navy to hold the fort and thwart British plans. The resolve of the Americans inspired Francis Scott Key’s lyrics for the Star-Spangled Banner.

Please contact Silver.com if you have any questions about silver for sale. Our team is available at 888-989-7223, online using our live chat, and via our email address.