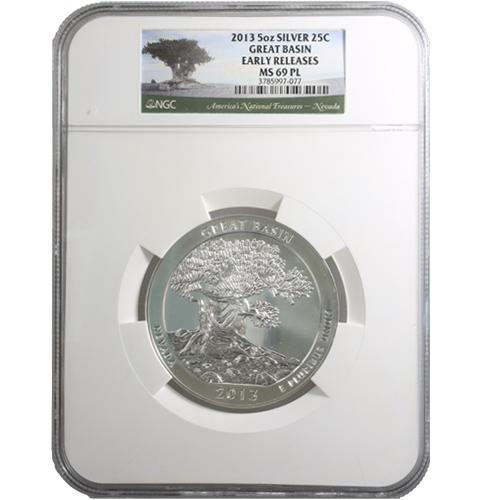 In the America the Beautiful Series, the United States Mint issues five coins per year with a new design on the reverse. Each coin in the series represents a different jurisdiction in the United States, from all 50 states and Washington D.C. to the country’s five overseas territories around the world. Today, 2013 5 oz Silver ATB Great Basin Coins are to you online at Silver.com in near-perfect condition.

Great Basin National Park was first established as a federally-protected space within the United States on January 24, 1922. Via a presidential proclamation, President Warren G. Harding created the protected lands under the name Lehman Caves National Monument. The area was later designated as a national park during the administration of President Ronald Reagan on October 27, 1986.

All of these 2013 5 oz Silver ATB Great Basin Coins arrive with a near-perfect certification from the NGC. A Mint State 69 coin has full, original mint luster and comes with a maximum of two minor detracting flaws present. Examples of acceptable flaws include minuscule contact marks or hairlines that must be located outside of the primary focal points of the coin. The included Early Release label indicates the NGC received each coin for certification within 30 days of the US Mint’s original release.

On the obverse of 2013 Silver ATB Great Basin Coins is a depiction of President George Washington. Just the second president to ever feature on a US coin, this bust of President Washington is also the second-longest used portrait of a president on US coins behind the 1909 debut of President Abraham Lincoln on the US penny.

The reverse side of 2013 5 oz Silver ATB Great Basin Coins features the image of a bristlecone pine. This species of pine tree consists of three subspecies, each of which is ideally suited for dry climates and bad soil. This explains the ability of the bristlecone pines in Great Basin National Park to survive for generations.

Please feel free to contact Silver.com if you have any questions about silver for sale. Our customer service team can field your questions on the phone at 888-989-7223, online via our live chat, and through our email address.