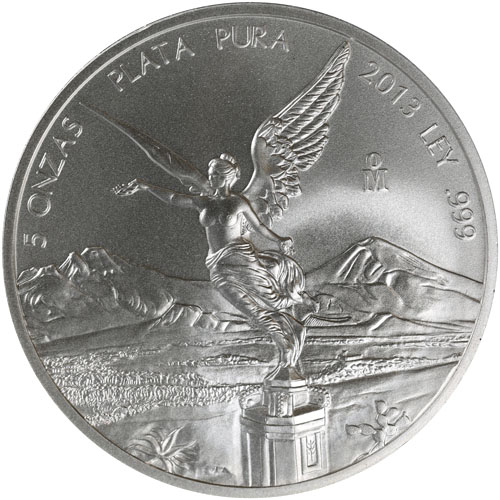 Whether you’re working to collect a Mexican Libertad coin from every year of minting or buying these coins as an investment, you won’t be disappointed with the options at Silver.com. You can buy the 2013 5 oz Silver Mexican Libertad Coin here as well as others of different metal weights or mintage years.

The obverse side of the coin is extremely ornate. It includes 11 total coats of arms. The Mexican National Shield gets the best billing as it’s centered on the coin and surrounded by the inscription Estados Unidos Mexicanos. Around that are 10 other images taken from historic coats of arms related to the nation. You’ll see repeating elements, such as the Mexican golden eagle, which symbolizes good winning over evil and the Aztec city of Tenochtitlan.

The reverse side of the 2013 Silver Mexican Libertad Coin depicts the infamous Angel of Independence. This statute, which is also called the Winged Victoria, was originally designed in response to a contest to create a statue to celebrate Mexico’s independence. It eventually was placed on an enormous pedestal in Mexico City. The coin depicts the statue in the foreground with the volcanoes Popocatépetl and Iztaccíhuatl in the background. These volcanoes play an important role in Mexican history and mythology, especially among the peoples that made this area home before Spanish colonization.

Your 2013 Silver Mexican Libertad Coin will ship in a protective plastic flip to keep it safe and to provide a convenient storage option once it arrives. These coins are unique in the collecting world in part because they have no face value but remain an officially minted bullion coin from the Mexican government.

One of the benefits of Mexican Libertad silver bullion coins is that they were typically issued in low mintages. That can make some of them hard to find, so collectors and investors may want to act when they see them available. Buy your 2013 5 oz Silver Mexican Libertad Coin at Silver.com today. You can call us at 1-888-989-7223 if you have any questions about silver for sale, or reach out to our reps via chat or email for more information.