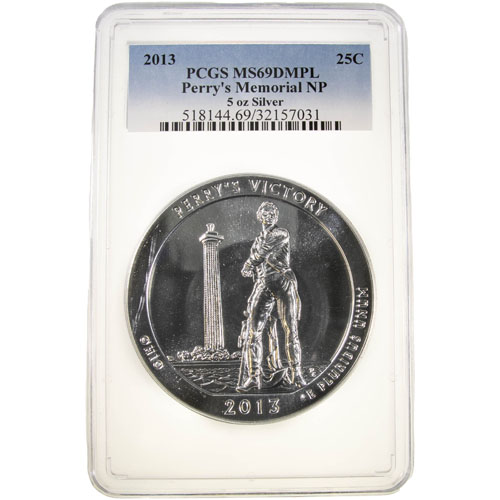 In 2013, the America the Beautiful Series crisscrossed the country with designs honoring sites from New Hampshire and Maryland on the American East Coast to Nevada in the American West and South Dakota and Ohio in the American heartland. The Ohio release honored Oliver Hazard Perry and the famous American victory at the Battle of Lake Erie in 1813. Today, 2013-P 5 oz Silver ATB Burnished Perry’s Victory Coins in perfect condition are available to you online at Silver.com.

The memorial site established on the shores of Lake Erie along the coast of Ohio celebrates the American victory against the British Navy during the War of 1812. Led by American naval commander Oliver Hazard Perry, the American forces won a decisive engagement with the British during the Battle of Lake Erie in 1813, one of nine victories for American forces in the western theater of the conflict that proved decisive in the overall American victory in the war.

All of the 2013-P 5 oz Silver ATB Burnished Perry’s Victory Coins listed here come in perfect condition with unique SP70 grades. Coins in this condition have full, original mint luster and bear no detractions. This grade is unique to Burnished Coins and other non-proof coins as it identifies a coin with distinct visual appeal that is not quite on the level of a proof coin.

On the obverse of 2013-P Silver ATB Burnished Perry’s Victory Coins is a left-profile effigy of President George Washington. The first President of the United States, Washington has graced the US quarter since 1932 when his portrait debuted on the coins to mark the bicentennial of his birth.

The reverse field of 2013 5 oz Silver ATB Burnished Perry’s Victory Coins comes with a view of the International Peace Memorial and the statue of Oliver Hazard Perry that stands at the site. Perry comes from America’s first naval dynasty family. His father was United States Navy Captain Christopher Raymond Perry and his younger brother was Commodore Matthew Perry.

Please contact Silver.com if you have questions when you buy silver coins. Our team can assist you at 888-989-7223, chat with you live online, or simply send us an email with your inquiries.