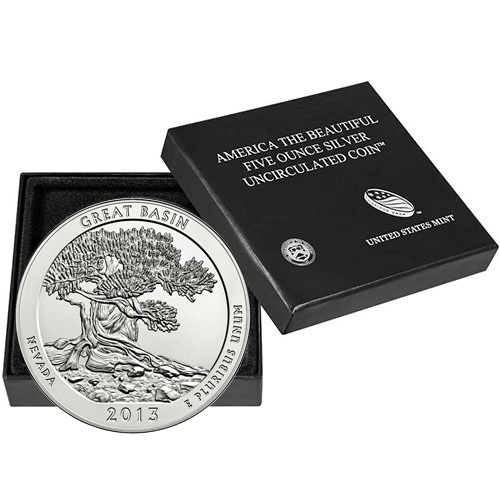 Located in the dry and mountainous region between the Sierra Nevada Mountains and the Wasatch Mountains on the West Coast, the Great Basin is the largest contiguous endorheic watersheds in North America. The Great Basin covers nearly all of the state of Nevada, as well as parts of Oregon, Utah, California, Idaho, and Wyoming. The 2013-P 5 oz Burnished Silver ATB Great Basin Coins are currently available to you for online purchase at Silver.com.

Typically, the coin designs released in the America the Beautiful Series follow an order based upon the establishment of the national park, national forest, or historical marker in the federal registry. The 2010 releases, for example, represented the oldest parks in the nation. Great Basin National Park in Nevada was formally established as a National Park in 1986, but its history goes back further.

It was President Warren G. Harding that created the Lehman Caves National Monument in January 1922. The Lehman Caves are found at the base of Wheeler Peak in the region, a point that rises to a height of 13,063 feet. Wheeler Peak is home to the Wheeler Peak Glacier, which is the southernmost glacier in the Northern Hemisphere. The land was covered by President Harding’s presidential proclamation until Congress established the park in 1986.

On the obverse of 2013-P 5 oz Burnished Silver ATB Great Basin Coins is the image of President George Washington. The first man to hold the office of President of the United States of America, Washington’s left-profile portrait has featured on the circulation quarter since 1932 in honor of his 200th birthday.

The reverse side of the 2013 Burnished Silver ATB Great Basin Coins features the image of a bristlecone pine tree within the park near the famous Wheeler Peak. The bristlecone pine is an ancient tree which is the oldest known nonclonal organism.

We encourage Silver.com customers to contact us with questions at 888-989-7223. You can also connect with us online with questions as you buy silver using our live chat and email address.