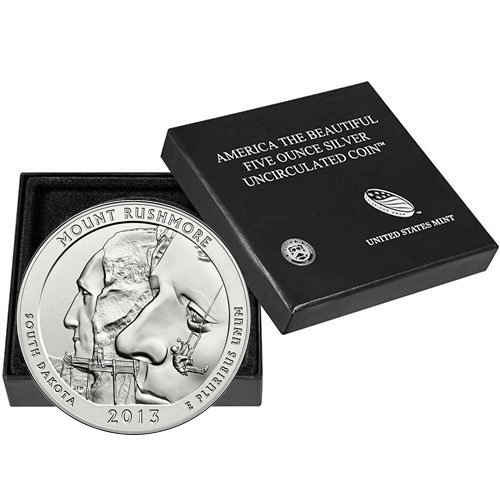 Mount Rushmore is one of the most breathtaking sights in the United States. The mountain itself, known as Cougar Mountain to the Lakota Sioux who originally inhabited the area, bears the likeness of four former US Presidents: Washington, Jefferson, Theodore Roosevelt, and Lincoln. Right now, the 2013-P 5 oz Burnished Silver ATB Mount Rushmore Coin is available to purchase online at Silver.com.

Each of the 2013-P 5 oz Burnished Silver ATB Mount Rushmore Coins in this product listing comes to you with its original United States Mint box. The coins also feature a Certificate of Authenticity and mint mark of “P” for the Philadelphia Mint. The burnished coins are issued by the Philadelphia Mint as opposed to the silver bullion versions, which feature no mint mark and are struck at the West Point Mint.

Construction on the carvings at Mount Rushmore took a total of 14 years, beginning during the Roaring 20s in 1927 and concluding in the midst of the Great Depression in 1941, just before the United States was pulled into World War II. The rock face of Cougar Mountain features the images of Presidents George Washington, Thomas Jefferson, Theodore Roosevelt, and Abraham Lincoln.

The reverse side of the 2013-P 5 oz Burnished Silver ATB Mount Rushmore Coin includes the vision of workers carving the sculptures of each president into the rock face. Each man was carefully chosen for their role in crafting the nation to that point in its history. Washington was perhaps the most influential individual in the nation’s founding, while Jefferson was responsible for nearly doubling the country’s size with the Louisiana Purchase. Lincoln preserved the Union with victory over the Confederacy in the Civil War, and Roosevelt took the nation onto the international stage as an emerging world power in the early 20th century.

On the obverse of the 2013 Burnished Silver ATB Mount Rushmore Coins is the official portrait of President George Washington featured on circulation quarters. Designed in 1932 by John Flanagan, the image was based upon a 1786 bust of Washington created during his lifetime.