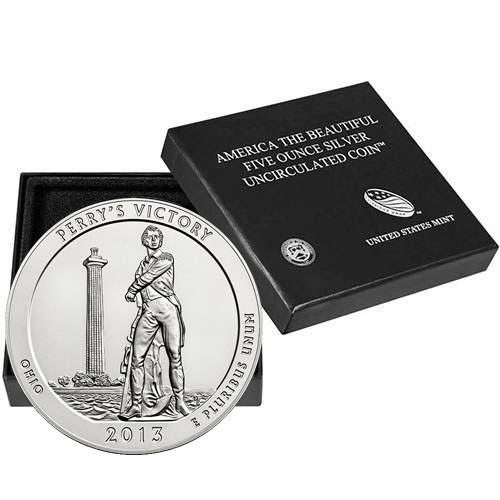 The War of 1812 was largely found on land in the United States and along the Ohio River Valley frontiers near the nation’s borders with Canada. However, one of its most significant battles took place on the waters of Lake Erie with the United States Navy emerging victorious over the powerful British Royal Navy. Right now, 2013-P 5 oz Burnished Silver ATB Perry’s Victory Coins are available to purchase online at Silver.com.

Each of the 2013-P 5 oz Burnished Silver ATB Perry’s Victory Coins in this listing is available to you with its original US Mint protective box. The coins include the Certificate of Authenticity from the US Mint and the “P” mint mark of the Philadelphia Mint. Only the Burnished Silver ATB Coins have a mint mark.

Oliver Hazard Perry was born in Rhode Island and came from a family with rich naval blood in a nation whose navy was, at the time, fledgling and untested. He was the son of US Navy Captain Christopher Raymond Perry and the older brother of Commodore Matthew C. Perry. Oliver Hazard Perry oversaw a fleet of nine US Navy vessels on Lake Erie which defeated and captured six vessels from the British Royal Navy, securing the lake throughout the war for the US.

On the reverse side of 2013-P 5 oz Burnished Silver ATB Perry’s Victory Coins is the statue of Oliver Hazard Perry from Perry’s Victory and International Peace Memorial. The site was built between 1912 and 1915 to commemorate the lasting peace between the United States, Canada, and Britain that has persisted since the end of the War of 1812.

The obverse side of all 2013 Burnished Silver ATB Coins includes the left-profile portrait of President George Washington. This design was created in 1932 by John Flanagan based upon a 1786 sculpture of the president. It has featured on the circulation quarter since 1932.

If you have any questions, please contact Silver.com. you can call our customer service team at 888-989-7223, chat with us live online, or simply send us an email with your questions about buying silver.