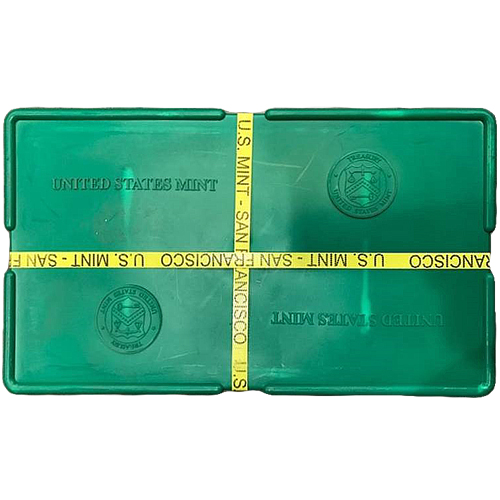 Any quantity available for $18.49 per oz over spot!

The United States Mint issues the Silver American Eagle as a 1 oz silver bullion coin every year, as well as offering proof and burnished collectible versions of the coin. Beginning in March 2011, the United States Mint sought to expand production capacity for this popular coin amidst crushing demand for the Silver Eagle. The original mint to strike the Silver Eagle returned to production of this coin that year. The 2013 (S) Silver American Eagle Monster Box is currently available to you for purchase online at Silver.com.

In October 1986, Secretary of the Treasury James A. Baker III was present when the very first Silver American Eagle bullion coins were struck by the US Mint at its San Francisco Mint facility. The ceremony kicked off with comments from Baker that he “didn’t need a pick and shove to start the San Francisco Silver Rush of 1986.”

Silver American Eagle coins were initially struck at the San Francisco Mint from the 1986 introduction until 1998. For two years in 1999 and 2000, the Silver Eagles were issued by the Philadelphia Mint. Since 2001, the West Point Mint has handled the production of the Silver American Eagle bullion coins. However, amidst the push for silver bullion during the recession, the West Point Mint struggled to keep pace.

On the obverse of 2013 Silver American Eagles is the Walking Liberty design from Adolph A. Weinman. In this design, Liberty is featured in left-profile relief as she walks toward the horizon with her arm outstretched and the American flag draped over her shoulders. The reverse of 2013 (S) Silver Eagles features the heraldic eagle of the United States as modernized by John Mercanti in 1986.

These 2013 (S) Silver American Eagle Monster Boxes include a total of 500 coins, each one in Brilliant Uncirculated condition. The coins are housed in mint tubes of 20 with a total of 25 tubes in the box. Though the listing denotes these coins as (S) from the San Francisco Mint, like other Silver Eagle bullion coins they do not feature any mint marks. This is simply to denote the coins and Monster Box originated at the San Francisco Mint.