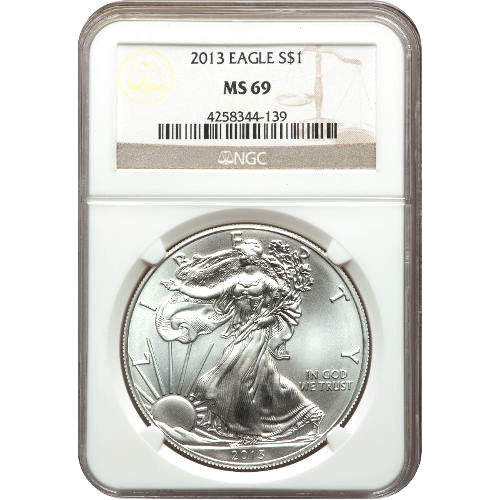 The Walking Liberty design features a full-length figure of Lady Liberty as she walks confidently toward the sunset. With the American flag draped across her shoulders, the image is meant to represent the nation’s constant march toward a brighter future.

Each of the 2013 Silver American Eagle coins in this Silver.com product listing is in near-perfect Mint State 69 condition according to the NGC. Coins of this grade have their full, original luster, but may also feature two detracting flaws, such as blemishes or contact marks.

On the obverse side of the coin you’ll find Weinman’s design of Walking Liberty, along with the engravings of “Liberty” and “In God We Trust.” The reverse side of the coin features US Mint Chief Engraver John Mercanti’s heraldic eagle design, which is capped by 13 stars in a triangular formation to represent the original American Colonies.

The United States Mint was founded in 1792 with passage by Congress of the Coinage Act of 1792. Silver American Eagle coins are predominantly produced at the West Point Mint, with assistance from the Philadelphia Mint and San Francisco Mint.

If you have questions, don’t hesitate to reach out to Silver.com at 888-989-7223. You can also connect with us online through our website’s live chat or by submitting your questions in an email. If you are looking for similar products, visit our NGC Graded Silver Eagles page.