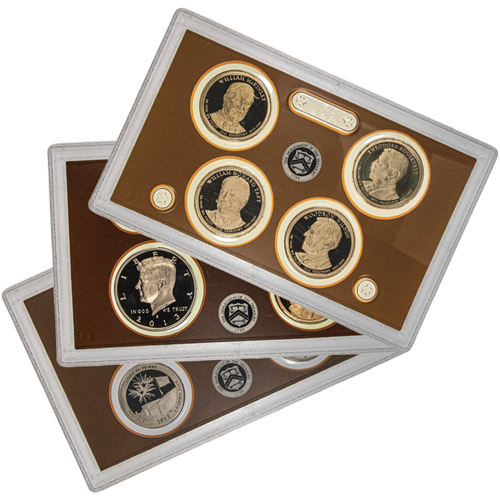 You won’t want to miss out on a coin set like this! Each of the 14 coins comes in an amazing mirror-like proof finish that is unrivaled by the circulation versions that are out there.

These coins were all minted in 2013 for use in sets just like this one. Since this is a set featuring circulation proofs, each of the coins features a face value that was granted by the United States government. Your set will include the Lincoln cent, Jefferson nickel, Roosevelt dime, Kennedy half dollar, and a Native American dollar. In addition, you will receive a few from a couple of the most popular coin series from the United States Mint.

Each set contains five America the Beautiful quarters, including the White Mountain National Forest, Perry’s Victory and International Peace Memorial, Great Basin National Park, Fort McHenry National Monument, and Mount Rushmore National Memorial. The coins represent the states of New Hampshire, Ohio, Nevada, Maryland, and South Dakota, respectively. These coins were all released in 2013. The America the Beautiful quarter program began in 2010, making these part of the fourth release year in the series.

The coins ship in plastic holders. They also come with a Certificate of Authenticity and a shipping sleeve. Since they are used, the packaging might show signs of wear and tear or be missing completely. However, all of the coins will be in good condition.

Should you need any assistance placing your order at Silver.com, contact our customer service team via live chat, email, or phone at 1-888-989-7223 if you have any questions about these coin sets or any other products on our website.