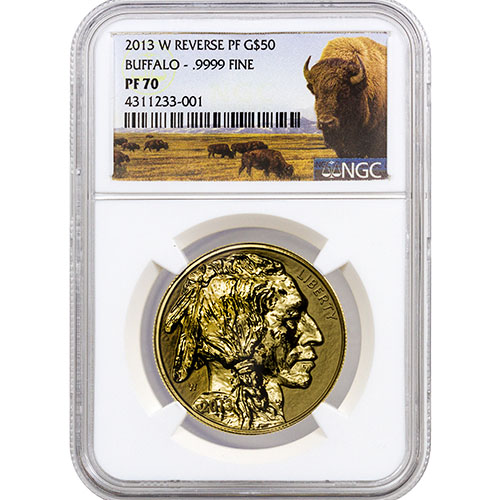 The Gold American Buffalo Coin is arguably one of the most significant to ever be released by the United States Mint. Though it was only just introduced in 2006, it marked the first time the US Mint had ever struck and released a 24-karat gold coin. Today, the 2013-W 1 oz Gold Reverse Proof American Buffalo Coin is available to you online at Silver.com with a perfect certification.

The 2013 Gold American Buffalo coin was offered in its usual proof and bullion versions, along with this special-edition reverse proof striking. These coins were struck for one year only to celebrate the 100th anniversary of James Earle Fraser’s iconic Buffalo Nickel design, which is reimagined with modern coining technology on the Gold American Buffalo.

Each of the 2013-W Reverse Proof Gold Buffalo coins in this product listing is a perfect proof specimen according to the NGC. Coins with a PF70 grade exhibit full, original mint luster and lack any manner of detracting flaws on the surface areas of the coin.

On the obverse of the 2013-W 1 oz Gold Reverse Proof American Buffalo you’ll find the image of a Native American chieftain, captured in right-profile relief and featuring the same engraving of “Liberty” found on the original Buffalo Nickels.

The reverse of the coin features a depiction of Black Diamond, the animal that inspired Fraser’s buffalo design. Black Diamond was a resident bison at the Central Park Zoo in New York City during the early 20th century.

A reverse proof coin has the same features as a typical proof, with one notable exception. The application of those standard proof features is reversed, with the design sets bearing a deeply-mirrored, clear finish and the background field exhibiting a strong, frosted matte appearance.

All Gold American Buffalo proof coins are produced by the West Point Mint facility in New York, as indicated by the presence of the “W” mint mark on the coin’s surface.

Please don’t hesitate to contact Silver.com. Our customer service team is available at 888-989-7223, online using our live chat, and via our email address.