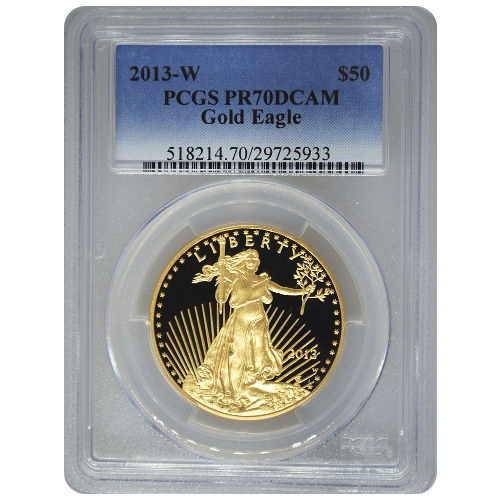 Proof Gold American Eagles are among the most sought-after coins in the world. The 22-karat gold purity in the coins makes them attractive to investors, but it’s the sharper rims and enhanced design features of the proof coin that make them a favorite among collectors. Struck with the same images on the obverse and reverse each year, the 2013-W 1 oz Proof Gold American Eagle is currently available on Silver.com.

Proof coinage originated over a century ago as a means of preparing for a bullion production run. These early proof coins were little more than tests of the die quality and accuracy of the coining press before circulation and commemorative bullion coins were struck. Today, many proof coin programs actually exceed the mintage of bullion counterparts.

On the obverse side of all coins is the image of Lady Liberty created by Augustus Saint-Gaudens. His creation is considered the most beautiful to ever grace an American gold coin, and first appeared on the $20 Gold Double Eagle between 1907 and 1933.

The reverse features a depiction of a family of nesting bald eagles. Created by Miley Busiek in 1986, the image shows a male eagle returning to the female and hatchlings in the nest carrying an olive branch in its talons.

Each of the Proof Gold American Eagles in this listing is a perfect proof coin, meaning each has its full, original luster and no detracting flaws. Highlights of a deep-cameo coin include a frosted design set overlaying a clear background field.

If you have any questions, feel free to contact a Silver.com associate at 888-989-7223. We’re also conveniently available online using our live web chat and email services. 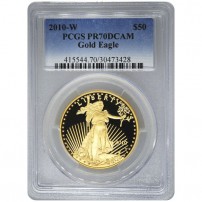