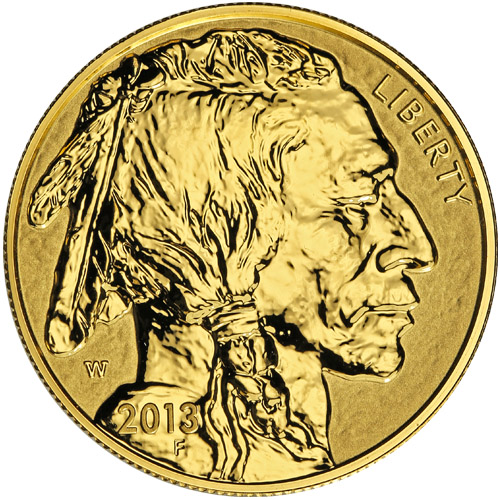 The first-ever 24-karat gold coin from the United States Mint was the American Gold Buffalo. Based upon the historic Buffalo Nickel design and unveiled in 2006, the Gold American Buffalo was part of a unique celebration at the United States Mint when a reverse proof striking occurred in 2013. Today, the 2013 1 oz Reverse Proof Gold American Buffalo Coin is available to you online at Silver.com.

Fraser was commissioned in 1913 to redesign the imagery on the American five-cent piece. His Buffalo Nickel design used a combination of facial features from three prominent Native American tribal leaders of the day, as well as a bison from the Central Park Zoo named Black Diamond. The Buffalo, or Indian Head, Nickel was in circulation from 1913 to 1938.

To celebrate the 100th anniversary of the Buffalo Nickel design from Fraser, the United States Mint commissioned and struck the Gold American Buffalo coin in reverse proof for one time only in 2013. Each gold coin includes a beautiful frosted background field, contrasted majestically by the deeply mirrored appearance of the design features.

On the obverse of the American Gold Buffalo coin is the left-profile portrait of a Native American chieftain. The image does not represent a singular individual, but rather, was designed by James Earle Fraser using a combination of facial features from numerous early 20th century Native Americans.

The reverse of each 2013 1 oz Reverse Proof American Gold Buffalo coin includes the depiction of Black Diamond. This bison was a resident of the Central Park Zoo in New York City in the early 20th century, and served as inspiration for Fraser’s design.

Please feel free to contact Silver.com with questions. You can reach us on the phone at 888-989-7223, on the web using our live chat, and via our email address. You can also use our website to find the latest price of gold per ounce.