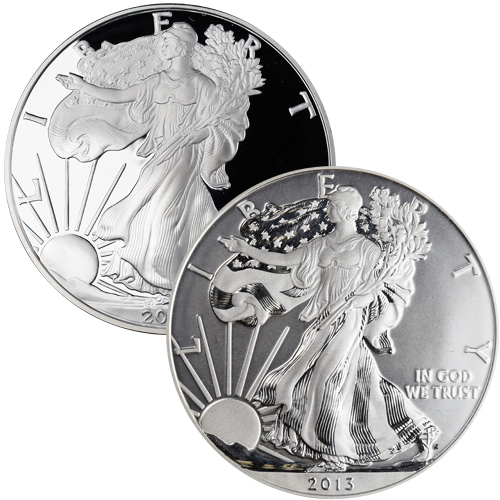 Each 2013 Silver American Eagle Two-Coin Set available here today ships to you inside of the original United States Mint commemorative display box, and includes a numbered Certificate of Authenticity validating your purchase of this brilliant set.

For 2013, the US Mint struck an impressively high number of proof coins at 934,331, which is one of the five highest mintage figures of all time for the proof. In addition to individual sales, the US Mint was featuring the Proof Silver American Eagle in two different collector’s sets for 2013.

The 2013-W Silver American Eagle West Point Mint 75th Anniversary Two-Coin Set includes a reverse proof striking of the Silver Eagle, as well as an enhanced version of the Burnished Silver American Eagle coin. When the first sets were released in 2011 by the US Mint, maximum mintages were set.

For both the 2012 San Francisco Anniversary Set and the 2013 Silver American Eagle Two-Coin, the US Mint did away with maximum mintage figures and used an open purchasing window instead. During the four-week window for this set, 235,689 two-coin sets were sold.

On the obverse of all Silver American Eagle coins is the image of Walking Liberty, which first graced the Walking Liberty Half Dollar from 1916 to 1947. The reverse bears the heraldic eagle of the United States. Originally introduced in 1794, it has been refined and modernized multiple times. This particular depiction came from then-Chief Engraver of the United States Mint, John Mercanti, in 1986.

If you have any questions, please don’t hesitate to ask. Silver.com customer service is available to you on the phone at 888-989-7223, on the web using our live chat feature, and via our email address. You can even visit our website to find spot silver prices for today!