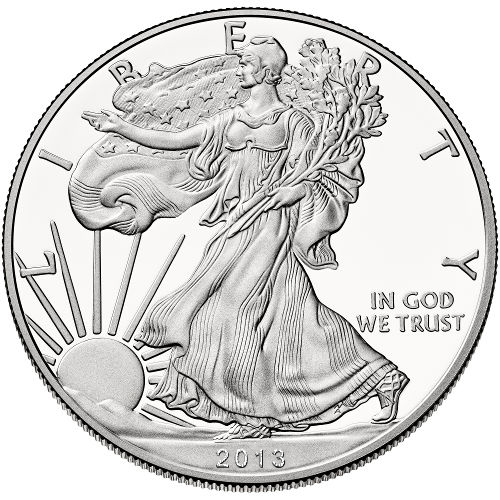 In 2013, the popularity of the Silver American Eagle coin remained high. Mintage levels remained steady in total around 34 million coins from the previous year. Mintage of the proof coin was down slightly in 2013, with roughly 9,000 fewer coins struck.

The second burnished coin available from the West Point Mint was available with three different finishes on it; heavy frost, light frost, and brilliant polish. The burnished coin and the reverse proof were offered by the United States Mint as part of the 2013 American Eagle West Point Two-Coin Set.

Adolph A. Weinman’s Walking Liberty design, which features Lady Liberty striding toward the setting sun wearing an American flag around her shoulders, is considered one of the finest in American history. It was chosen in 1986 after 39 years out of public view as the primary design of the Silver American Eagle.

John Mercanti, then-Chief Engraver of the United States Mint, modernized and refined the heraldic eagle design. First used in 1793 on America’s first coins, the heraldic eagle features the American bald eagle with arrows in one talon and an olive branch in the other, and serves as the official emblem of the US.

If you have any questions for a Silver.com associate, please don’t hesitate to ask. Our team members are available on the phone at 888-989-7223, online using our live web chat feature, and via email address.