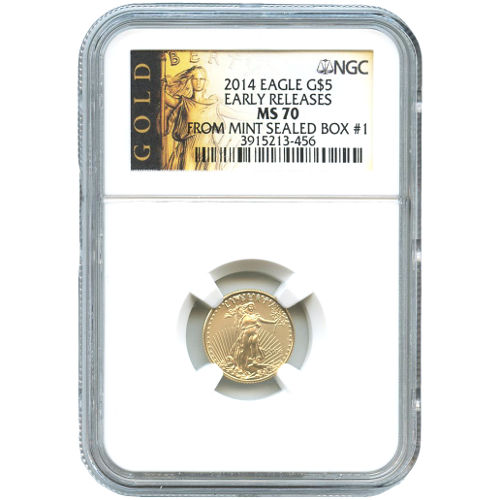 Lady Liberty and the bald eagle stand for freedom and power in American culture. The Statue of Liberty has stood in New York Harbor for 130 years, serving as a welcoming face for millions of immigrants seeking a better life in America. The bald eagle, chosen as the national emblem over two centuries ago, is respected for its power, majesty, and longevity. Gold American Eagles were first produced in 1986 following the passage of the Gold Bullion Coin Act of 1985. Congress authorized the program and established the Gold Eagle as the official gold bullion coin of the United States.

On the obverse side of the 2014 1/10 oz Gold American Eagle is Augustus Saint-Gaudens’ image of Lady Liberty. She is featured in a full-length figure, walking toward the viewer with a torch in her right hand and an olive branch in her left. Engravings include “Liberty,” the year of minting, and stars around the rim representing all US states. The US Capitol Building is visible in the left background. The front of the NGC label reads “2014 Eagle G$5” followed by “Early Release,” “MS70,” and “From Mint Sealed Box #1.” Below this information is the coin’s unique certification number which can be verified through the NGC.

Miley Busiek designed the image of a family of eagles on the reverse side of the coin. A male eagle is featured returning to the nest with an olive branch. The female eagle is attentively standing guard over the hatchlings and eggs. Engravings on this side include “United States of America,” the weight, purity, metal content, and face value of the coin. On either side of the eagle’s nest are the phrases “E Pluribus Unum” and “In God We Trust.”