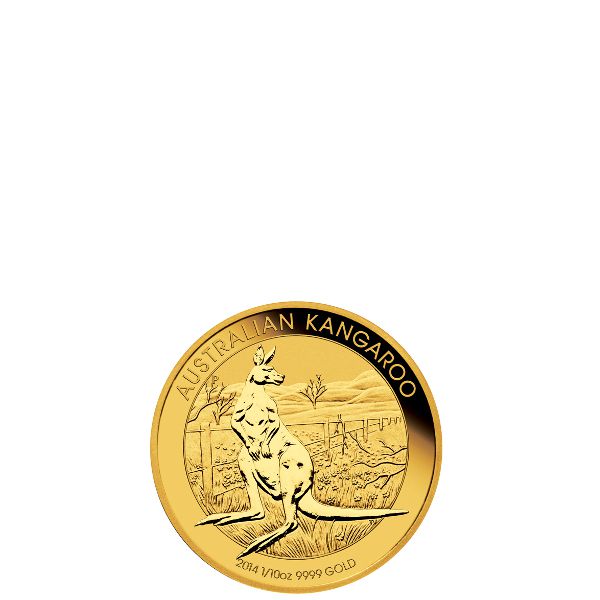 The Perth Mint of Australia has been producing the nation’s coinage since it was first put into operation in 1899. Throughout its storied history, Perth has produced a large quantity of highly sought after coins. Beginning in 1986, the Australian Gold Nugget became the hallmark annual release of Australia’s national mint. Only three years after it was initially released, however, Perth decided to change the coin’s design to feature a Kangaroo-one of Australia’s national symbols. Now, the coin series boasts the image of a Kangaroo which changes slightly with each new year’s release.

The 2014 1/10th oz. Australian Gold Kangaroo is available and ready to ship from Silver.com in Brilliant Uncirculated condition. Composed of .9999 (99.99%) pure gold, this coin is among the purest on the market today. The coin’s reverse depicts an imposing Australian Kangaroo in the foreground, seemingly jumping off the coin’s face. Behind the upright Kangaroo is the expansive Australian brush, complete with fencing, a mountain range, and a sparse population of trees. Arching above the beautiful depiction of the Australian wilderness is an inscription which reads ‘Australian Kangaroo’ while the 1/10th oz weight and .9999 purity indications are inscribed below.

The coin’s obverse features Ian Rank-Broadley’s depiction of Queen Elizabeth II. Surrounding the outer edges of the obverse side of the coin are inscriptions which read “Elizabeth II,” “Australia” and “15 Dollars.”

The Gold Kangaroo is without a doubt one of the most popular Perth Mint releases every year. Though the Kangaroo’s image never leaves the coin’s reverse, the exact depiction of this beautiful native Australian changes slightly with each new release. Valued as a collector’s item due to its limited annual mintages, and as an investment vehicle thanks to its high purity, the Gold Kangaroo is demanded by investors and collectors the world over. Few coins have designs as intricate as those which are found on the coins which make up the Gold Kangaroo series.

All orders from Silver.com will ship in discreet packaging and will be fully insured against the unlikely occurrence of loss. If you have any questions regarding our 2014 1/10th oz Gold Australian Kangaroo Coins or any of our products, don’t hesitate to reach out to our customer support staff. Representatives can be reached through our online contact form or through the live chat feature. You can also call the Silver.com customer service staff toll-free at 888-989-7223. 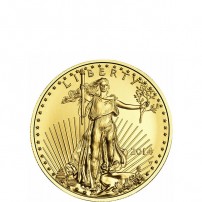