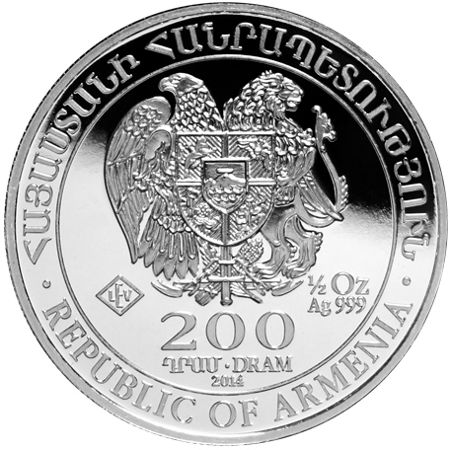 The story of Noah’s Ark is one of the greatest narratives from the Christian bible. Noah’s adventure is commemorated on the 2014 1/2 oz Silver Armenian Noah’s Ark coins. This is the official silver bullion coin for the government of Armenia, though they are actually produced outside of the country. Each of these coins have been minted with .999 pure silver and have a denomination of 200 Drams.

In 2011, the Central Bank of Armenia first issued the Silver Armenian Noah’s Ark coin. The narrative of Noah’s Ark in the Christian bible is one of punishment and survival. God decided to punish mankind with a destructive flood, but chose Noah and his family as a group worthy of survival to restart humanity. Noah was given instructions to construct an ark of immense proportions, and directed to collect two of every animal on Earth. Noah’s family was spared to help rebuild society and the animal world.

The obverse side of the Noah’ Ark coin features the coat of arms for the nation of Armenia. The image is surrounded by the phrase “Republic of Armenia” in both English and Armenian. Additional engravings include the weight, purity, metal content, and year of minting for the coin.

The coin’s reverse has been minted with the image of Noah’s Ark floating on the flood waters, which is where the coin derives its name. In the distant background, the sun can be seen rising over a mountain range. In the immediate foreground, a dove flies off the coin with an olive branch in its beak. Engravings on this side include the phrase “Noah’s Ark” in English and Armenian.

All orders that are placed with Silver.com will be packaged by our staff with safety and include full shipping insurance. If you have any questions about the 2014 1/2 oz Silver Armenian Noah’s Ark Coins before you place your order, please call Silver.com at 1-888-989-7223. We will also gladly assist you online through live chat and email.