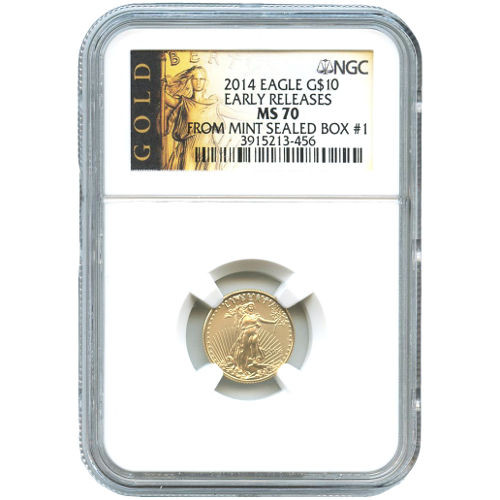 Gold American Eagles are the official gold bullion coins of the United States government. The Founding Fathers of America settled on the bald eagle as the national emblem in 1792 because of the bird’s mythology as a powerful, majestic creature with impressive longevity. Following the turmoil of the Revolutionary War, during which Americans put their fortitude and determination on display, those early leaders saw many similarities between these creatures and the spirit of the American people. Now, you can own a 2014 1/4 oz Gold American Eagle Coin with a NGC MS 70 rating. These coins have each been chosen from the US Mint’s first sealed monster box of 1/4 oz gold eagles in 2014.

Similar to the Silver American Eagle, the 2014 1/4 oz Gold American Eagle was established by an act of Congress in 1985. The Gold Bullion Coin Act of 1985 authorized the production of an official gold bullion coin using only gold sourced from within the United States. The first coins were released in 1986, and today are viewed as some of the finest gold bullion products in the world.

The 2014 1/4  oz Gold American Eagle uses Augusts Saint-Gaudens’ image of Lady Liberty on the obverse side. In the image, Lady Liberty is seen walking towards the viewer with a torch in her right hand and an olive branch in her left. Her image is surrounded by 50 stars, representing all 50 US states, the word “LIBERTY,” and the coin’s year of minting.

On the reverse side, Miley Busiek’s image of a male eagle returning home to its nest is included. In the nest, a female eagle tends to the young hatchlings and eggs of the family. Engravings on this side include “United States of America,” and the weight, face value, and metal content of the coin.

The United States Mint has served as the official facility of the federal government since the passage of the Coinage Act of 1792. These 2014 1/4 oz Gold American Eagle Coins carry an MS 70 rating from the Numismatic Guaranty Corporation. A grade of MS 70 indicates a coin that is perfect, with a very attractive, sharp strike and original luster of the highest quality for mint and date marks.

Silver.com wants all shoppers to enjoy their experience with us. If you have questions about the 2014 1/4 oz Gold American Eagle Coins from US Mint Box #1, or our purchasing process, don’t hesitate to call us at 888-989-7223. You can also contact a representative through our website’s live chat function during business hours.