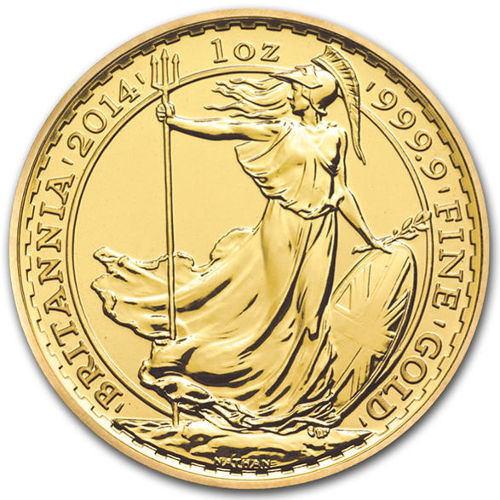 Gold bullion is more popular now than it has ever been, particularly among investors. While many gold bullion products are minted just for consumption by investors, there are those which are minted as sovereign currency and attract the attention of collectors at the same time. The 2014 1 oz Gold British Britannia Coins are the perfect example of coins minted for circulation that also make a great investment tool. Each coin is minted in 99.99% pure gold and weighs 1 troy oz.

Lady Britannia first appeared on coins in the United Kingdom around 119 AD. Roman Emperor Hadrian, responsible for the infamous Hadrian’s Wall along Britain’s northern frontier, first placed Britannia’s image on a coin. Today, the image of Britannia is used on the 2014 1 oz Gold British Britannia coin. In the primary image she is seen in her flowing gown, helmet on her head and trident in hand, standing at the water’s edge, ready to defend the British Isles from any threat.

On the reverse side is the image of Britannia, on guard along the coast of the British Isles. Engravings surrounding her image include the word “Britannia,” the year of minting, weight, purity, and metal content in the coin. On the obverse side of the coin is the right-profile image of Queen Elizabeth II. Her Majesty’s image is surrounded by engravings including her name, her title, and the face value of the coin as legal tender.

If you would like to purchase these coins or if you have any questions, please call Silver.com at 1-888-989-7223. You can also place your order online by going through our simple and secure checkout process. Feel free to reach out to us through live chat, email, or by filling out the online form located on the contact page alternatively.