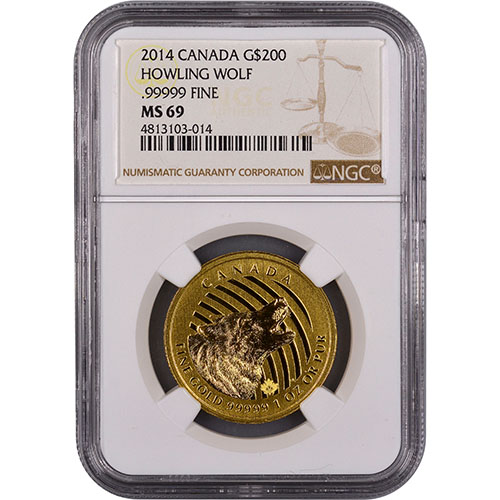 It isn’t very often that you find gold for sale with .99999 fine gold content. The vast majority of gold struck in bar or coin form these days comes in either .999 or .9999 gold. The Call of the Wild Series from the Royal Canadian Mint features a new design in each release and a stunning purity level of .99999 fine gold. The 2014 1 oz Gold Canadian Howling Wolf Coin is available to you right now for purchase online at Silver.com with NGC certification!

The Call of the Wild Series of gold coins from the Royal Canadian Mint debuted in 2014 with this beautiful Howling Wolf design. Recent issue years have seen the design of a cougar, grizzly bear, and even an elk come to the collection. However, the Howling Wolf’s popularity drew more buyers into the series and made it what it is today.

Known around the world by many names, the gray wolf is the largest extant member of its family. It is found in the wilderness and remote areas of Eurasia and North America. Males in the species average 95 to 99 lbs and are skilled pack hunters that can take down creatures much larger than themselves when working in a team.

The reverse of the 2014 1 oz Gold Canadian Howling Wolf Coin includes the depiction of a wolf as it howls off into the night. The gray wolf is a highly advanced creature biologically which has adapted to hunting large prey and developed very expressive behavior. Its call is one of the most recognizable sounds you’ll hear in the wilds.

On the obverse of the Gold Canadian Howling Wolf Coins is the portrait of Queen Elizabeth II. Her Majesty has ruled as Queen of England since 1952, and her effigy is routinely updated for Canadian coinage. This is the fourth-generation portrait developed in 2003 by Susanna Blunt.

The 2014 1 oz Gold Canadian Howling Wolf Coin available to you today is in near-perfect condition. The coins have a Mint State 69 grade from the NGC indicating the presence of full, original mint luster with a maximum of two minor detracting flaws.

We encourage Silver.com customers to contact us on the phone at 888-989-7223 with questions. You can also reach out to us online through our live chat and email address.