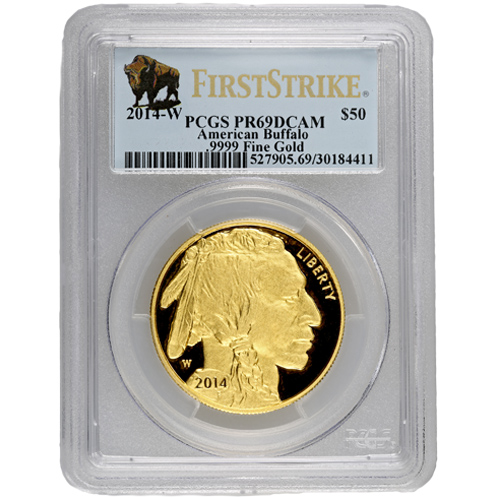 The Proof Gold American Buffalo coin is part of the larger Gold Buffalo series that includes a bullion version of the coin as well. America’s first-ever 24-karat gold coin, the Gold Buffalo features designs from the iconic Buffalo Nickel which was designed in 1913 by James Earle Fraser and featured on the five-cent piece through 1938. Today, the 2014-W 1 oz Proof Gold American Buffalo Coin is available in near-perfect condition online at Silver.com.

Each 2014 Proof Gold American Buffalo coin listed here is a near-perfect proof specimen according to the PCGS. Gold coins with a PR69 grade have full, original mint luster and a maximum of two minor detracting flaws on the surface area. These are limited to minuscule contact marks or hairlines.

DCAM, or deep-cameo, gold coins have a beautiful finish beyond that of the average proof. These coins have strong, frosted features on the raised design sets of the coin, which contrast beautifully with the deeply-mirrored, clear background fields of the coin’s surfaces.

First Strike coins are those which arrived at the PCGS within a certain timeframe for certification. To qualify, they must arrive from the US Mint within 30 days of the release date that was set for 2014 Gold American Buffalo coins.

The reverse of the 2014-W 1 oz Proof Gold American Buffalo coin has the image of Black Diamond, a resident bison of the Central Park Zoo in New York City at the turn of the 20th century. Fraser’s inspiration for both the obverse and reverse design of the original Buffalo Nickel came from his childhood growing up in Minnesota and exploring the plains of the Upper Midwest with his father.

Please direct your questions to Silver.com at 888-989-7223. You can also connect with us online using our live chat and email features. Don’t forget to check gold prices on our homepage too!