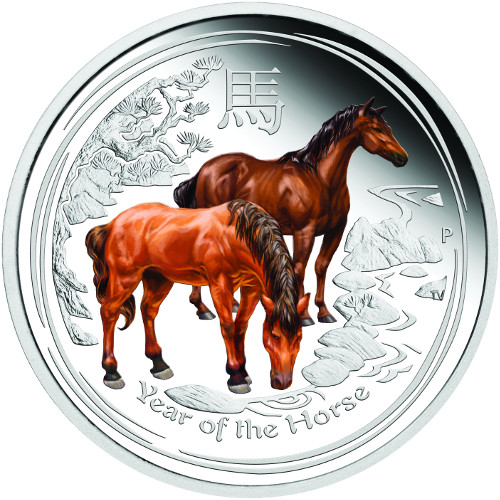 This is the second go-round on lunar-themed coins for the Perth Mint. The original Lunar Series debuted in 1996 with the Year of the Mouse (Rat), and ran for 12 years with a new reverse design each year. After the successful conclusion of that original program, the mint immediately launched a new series.

Lunar Series II coins feature new designs compared to their original series counterparts, and by in large these products are available in greater variety than the coins of the original collection. For example, colorized proofs add collectible value to the coins in the Lunar Series II lineup.

The 2014 1 oz Proof Colorized Silver Australian Horse Coin is one of two colorized proofs offered by Perth Mint. Its low mintage of 10,000 coins in total includes just 9,000 coins released for individual purchase like this. The remainder are reserved for proof coin sets.

On the obverse of each coin in the 2014 Year of the Horse release from Perth Mint is the right-profile portrait of Queen Elizabeth II. Her Majesty’s effigy has appeared on the obverse of all British and commonwealth coinage since she ascended to the throne in 1952, and this design was created in 1998 as a fourth-generation depiction of the Queen by Ian Rank-Broadley.

The reverse of the 2014 1 oz Proof Colorized Silver Australian Horse Coin features the image of two horses grazing in a field. This design is unique to the silver versions of the coin, and for this particular release has brilliant natural tones added to the finish to give the horses a life-like appearance.

Perth Mint was originally a Royal Mint facility, and it remained under British control until 1970. At one point striking Australian coinage, it now focuses on commemorative and bullion issues as the Royal Australian Mint is the sovereign mint of the country.

We encourage Silver.com shoppers to ask our customer service team questions. You can reach us at 888-989-7223, connect with us live online, or simply email us.