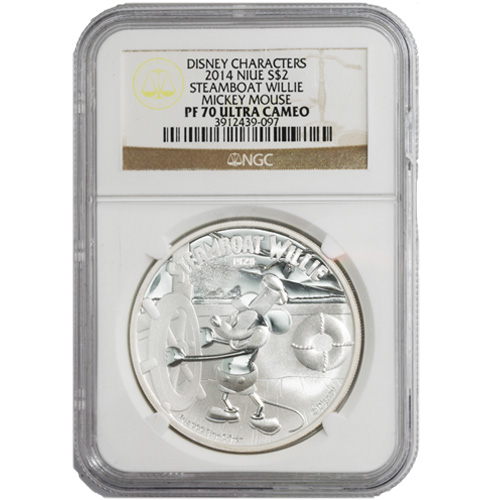 The New Zealand Mint is a leader when it comes to the production of Disney-themed silver for sale. Everything within the Disney universe is seemingly up for grabs for coining at the New Zealand Mint, including the iconic and beloved characters of the past, as well as more modern characters from the Star Wars reboots and modern Disney princess films. Now, 2014 1 oz Proof Silver Niue Mickey Mouse Steamboat Willie Coins are available to you for purchase online at Silver.com in perfect condition.

Mickey Mouse remains an icon in the Disney universe along with his girlfriend Minnie Mouse, best pals Donald Duck and Goofy, as well as his faithful dog, Pluto. Many of these characters are known to more than just preschoolers and young children today, as most were introduced decades ago by Walt Disney and his original design partner Ub Iwerks.

Mickey was one of those original characters to feature from the two creative minds. Steamboat Willie quickly became the most popular cartoon of its era as it was the first to offer synchronized sound and was the first to offer up a soundtrack that was created entirely after the film was produced. The animated short film was ranked 13th in the book The 50 Greatest Cartoons.

On the obverse side of 2014 1 oz Proof Silver Niue Mickey Mouse Steamboat Willie Coins is a depiction of Queen Elizabeth II. This right-profile bust of Her Majesty is from Ian Rank-Broadley and shows the Queen wearing the Girls of Great Britain and Ireland Tiara. This portrait was in use on British coins from 1998 to 2015, Australian coins from 1999 to 2019, and remains in use on the coins of nations like Niue, Tuvalu, and the Cook Islands.

The reverse face of the 2014 Proof Silver Niue Mickey Mouse Steamboat Willie Coins includes an image of Mickey Mouse from Steamboat Willie. Introduced in 1928, the animated short film is considered the debut of Mickey and his girlfriend Minnie Mouse. In the film, Mickey steers a sidewheel paddle steamer down a river as he whistles along to the song “Steamboat Bill.”

Silver.com customer service is available to assist you with questions at 888-989-7223. Alternatively, you can connect with us online through our live chat and email address features.