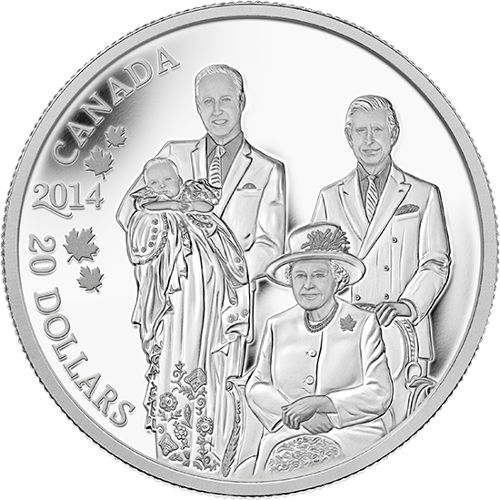 The people of Canada now enjoy a great measure of independence. The nation was formerly a colonial possession of both France and England. It is the latter ruler that Canadians maintain an emotional bond with. While Canada is now an independent nation, it remains a part of the British Commonwealth and recognizes the British royal family as its official head of state. The Royal Canadian Mint pays homages to the royal family with the 2014 1 oz Silver $20 Canadian Royal Family coin.

Since the inception of the RCM in 1908, the facility has included the image of the Commonwealth’s reigning monarch on its coins. Queen Elizabeth II has been England and the Commonwealth’s monarch for more than 60 years now. Her image has appeared on Canadian coins ever since, and undergone four generations of change to reflect her age throughout her reign.

In the Royal Canadian Family coin series, Her Majesty is featured along with the direct heirs to the throne. The family image was designed by Canadian artist Cathy Sabourin. On the obverse side is Susanna Blunt’s standard right-profile image of Queen Elizabeth II.

The image of the Royal Family on the reverse side includes Queen Elizabeth II seated in the lower right corner. Directly behind her stands her son Prince Charles, the first in line to throne. To his father’s right stands Prince William, the second in line for the throne. In his arms, Prince William holds his young son, Prince George. Engravings on this side include the year of minting, the word “Canada,” and the face value of the coin.

The obverse side of the coin features the third-generation image of Queen Elizabeth II, as designed by Susanna Blunt in 2003. Her image is surrounded by the engravings “Elizabeth II” and “D.G. Regina.”

The Royal Canadian Mint was established by Canada’s British rulers in order to produce coins more efficiently for Canada. Previously, Canadian currency was made at the Royal Mint in London. Today, the mint operates three facilities across the country and is solely responsible for the production of circulation and commemorative coins in Canada.

If you have any questions about the 2014 1 oz Silver $20 Canadian Royal Family Coins before making your order, please call us at 1-888-989-7223. We can also be reached online through live chat and email. Make sure you look over our entire collection of Canadian Silver Coins for more special edition pieces from the RCM.