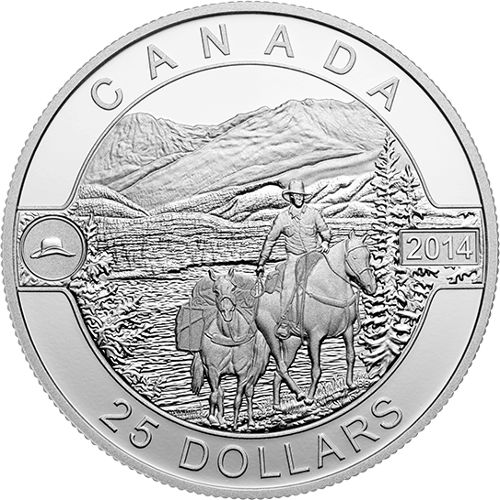 The American West is often most easily associated with the imagery of cowboys. Dusty towns, outlaws, and gun battles epitomized the lawless west and gave rise to the lore of cowboys. The nation of Canada is no stranger to cowboy lore in its cultural history, and the Royal Canadian Mint pays homage to those tough individuals that settled Canada’s western provinces. The 2014 1 oz Silver $25 Canadian Cowboy in the Rockies Coin depicts one of those brave souls who settled the rough lands.

The Cowboy in the Rockies Coin is produced by the Royal Canadian Mint as part of the O Canada series. The O Canada series was designed to represent the natural wonders and cultural history of Canada. Both aspects are represented on the 2014 1 oz Silver $25 Canadian Cowboy in the Rockies coin. On one side is the image of a lone cowboy in the mountains, while the opposite side has the traditional image of the Commonwealth’s monarch, Queen Elizabeth II.

On the reverse side of the coin is the Royal Canadian Mint’s image of a single cowboy. He is seen in the foreground, riding his horse while he guides a pack-horse behind him. In the background, the majestic Rocky Mountains raise up toward the heavens. Engravings on this side include “Canada,” the face value of the coin, a cowboy hat, and the year of minting.

On the obverse side of the coin is Susanna Blunt’s famous right-profile image of Queen Elizabeth II. Her Majesty’s image on the current coin series was updated in 2003 to accurately represent her appearance as she has aged during her reign as the monarch of the Commonwealth and United Kingdom. The Queen’s image is surrounded by engravings of “Elizabeth II” and “D.G. Regina.”

Upon ordering, you will find that the coin will be shipped in secure and discreet packaging with full insurance. This helps to protect the coin from damage, theft and loss. If you wish to learn more about the 2014 1 oz Silver $25 Canadian Cowboy in the Rockies Coins, please contact us at your convenience. We can be reached at 1-888-989-7223 or through email and online chat.