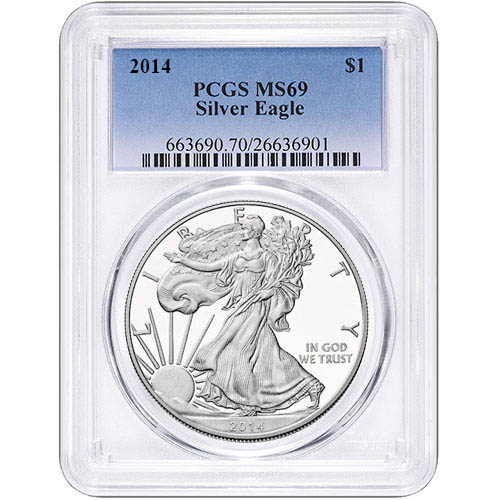 In 2014, the Silver American Eagle bullion coin set a new sales record for the fifth time in six years. Between 2008 and 2015, the Silver Eagles hit new highs in sales in every year but 2012. The stretch from 2013 to 2015 saw three new records set with each year and culminated in the program’s standing record of 47 million coins for the 2015 release. Right now, 2014 1 oz Silver American Eagle Coins are available to purchase online at Silver.com in near-perfect condition.

Each 2014 1 oz Silver American Eagle Coin available in this product listing comes to you with a near-perfect grade of Mint State 69 from the PCGS. Coins in this condition exhibit full, original mint luster with no more than two minor detracting flaws present. Examples of acceptable flaws at this grade level include only minuscule contact marks or hairlines.

The 2014 Silver Eagle experienced another impressive opening sales day, but at 3,180,500 coins sold it could not match the record set by the 2013 coin’s opening sales day figures. The 2014 coin did, however, manage to set a new sales record in a year that saw rationing and suspensions take place at various times as the US Mint struggled to match demand. In fact, 10 million coins were ordered in September and October alone, resulting in a temporary sellout and allocation returning for the remainder of the year.

On the obverse of 2014 Silver American Eagle Coins is Adolph A. Weinman’s depiction of Liberty. Known as Walking Liberty, this design features Liberty in left-profile relief as she marches from right to left across the coin’s design field moving toward the sun on the horizon in the distance.

The reverse of 2014 1 oz Silver Eagle coins includes the heraldic eagle of the United States. The design of these coins was modernized in 1986 by John Mercanti. The 2014 Silver American Eagle coin had a mintage figure of just under 1.4 million coins greater than the 2013 coins at 44,006,000. This remains the second-highest mintage figure in program history.

If you have any questions, please contact Silver.com at 888-989-7223, chat with us live online, or feel free to send us an email with your inquiries.